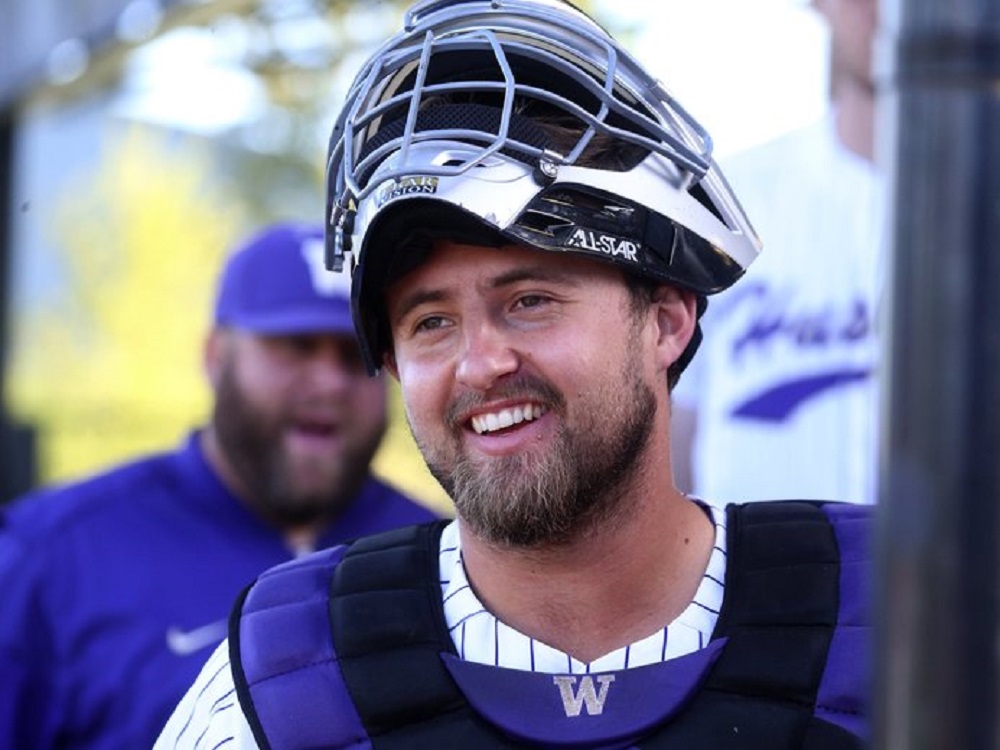 We opened our 2019 WCL season last night (June 4) with an 8-2 loss at Walla Walla. That series continues at 6:35 p.m. on Wednesday and Thursday; we then head north to Victoria for a weekend set with the HarbourCats.

We return to Corvallis after that series for a seven-game homestand. We’ll host the Cowlitz Black Bears on June 14-16, the Bellingham Bells on June 18-20 and the Gerding Construction American Legion team on June 21.

Washington catcher Nick Kahle (2016, pictured above) was selected by Milwaukee in the fourth round of the MLB draft on June 4. He was the 133rd overall selection.

Former Oregon State pitcher Dakota Donovan (2017), who spent the 2019 season at Central Arizona JC, was taken in the 16th round by the Los Angeles Angels as the 481st overall choice. He has signed with Hawaii for the 2020 season.

OSU right-fielder Tyler Malone (2017) went to San Diego in the 27th round as the 803rd overall selection. Tyler hit three homers at the 2018 College World Series, helping the Beavers win the NCAA title.

Infielder Michael Curialle (2019) of JSerra High School in California, a UCLA signee, went to Colorado in the 31st round as the 939th overall pick.

Infielder Brooks Lee (2019), a Cal Poly signee from San Luis Obispo High School, went to the Giants in the 35th round. He is the son of Larry Lee, the head coach at longtime partner school Cal Poly.

Left-handed pitcher Austin Crowson (2016) of Western Oregon was drafted by Philadelphia in the 39th round as the 1,170th selection. He was a first-team GNAC all-star.

More Adley Rutschman (2016) news. He is one of three finalists for the Buster Posey Award, given annually to the nation’s top collegiate catcher. Other finalists include Kyle McCann of Georgia Tech and Eric Yang of UC Santa Barbara.

The Buster Posey Award was formally named the Johnny Bench Award. The winner will be unveiled at the 22nd Annual Greater Wichita Sports Banquet on June 27.

Make sure to save the date for our first Nectar Creek Fan Faire celebration, set for 5:30-9:30 p.m. on Thursday, June 13. We will turn Goss Stadium into a 13th century castle with the help from the Shrewsbury Renaissance Faire!

Our 2019 regular season is underway but there are still 31 more home games! Our WCL home opener is June 14, against the Cowlitz Black Bears.