Mack the Knight, the official mascot of the Corvallis Knights, appears at every home game and at events throughout the year in Corvallis and the surrounding area. He’s the Knights biggest booster and enjoys meeting and interacting with Knights fans of all ages all around Goss Stadium, or at other events throughout the year. Lil’ King is also an official mascot of the team, and he can be seen at Mack’s side during games and community appearances.

Mack welcomes fans into Goss Stadium, escorts the first-pitch participant to the mound, high-fives the Knights as they take their positions, and joins our coaches and players along the third-base line during the Star-Spangled Banner. He’s kind of a ham and he especially likes having his picture taken with Knights fans.

Mack and Lil’ King are constantly on the move during the game. They assist the interns with our between-inning promotions, cheer on the contestants, and sometimes even participate in the fun! They lead in the singing of “Take Me Out to the Ballgame” during the seventh-inning stretch and then escort fans out of the stadium after the game, after racing all the kids in the ballpark around the bases!

Who is Mack the Knight?

Mack the Knight is the official mascot of the Corvallis Knights baseball club.  He’s big and fierce-looking but in person is the friendliest, most accessible mascot in the West Coast League. Mack loves to cheer for the team and mingle with the fans at Goss Stadium, and he really, really loves to pose for photos with kids and other Knights fans. Mack went away for an extended spa retreat at Epic Day Spa in Corvallis in early 2015 and returned later that spring with an updated look and with a rejuvenated, refreshed and restored outlook on life. 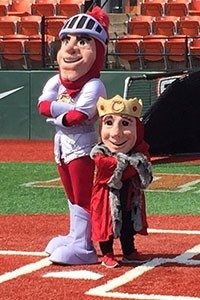 Who is Lil' King?

Lil’ King joined our family in 2015. He is Mack’s sidekick, but he rules the kingdom of Knights Baseball with humor, compassion and impressive dance moves.

How old is Mack the Knight?

Mack likes to keep his age a secret but one thing’s for sure, he always stays young at heart and never, ever grows old. He grew up in the Portland area when the Knights played at Mt. Hood Community College, and then packed his bags and moved down to Corvallis in 2007 when they relocated here.

Where does Mack live?

Mack lives at Goss Stadium. He has his own area in the Knights locker room and he’s even been known to polish his hitting and base-running skills during the night when no one’s looking.

You don't tug on Superman's Cape, but can you tug on Mack's cape?

Nope. Mack’s as friendly as can be, but he doesn’t like anyone tugging on his cape, stepping on his toes, grabbing any part of his body or punching him in the chin, even though it’s chiseled like granite.

How can we get Mack the Knight or Lil' King to our function?