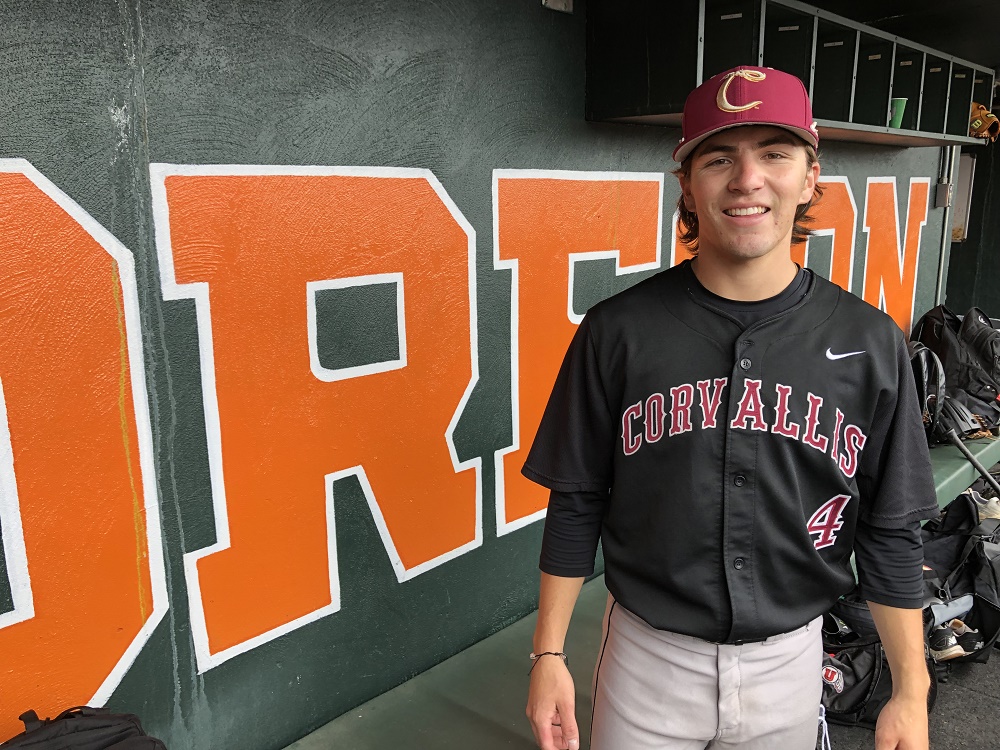 Players with Corvallis connections led the Knights to a 4-2 nonconference victory over the Portland Sea Dogs before an enthusiastic opening-day crowd of 2,830 on Weyerhaeuser Science, Engineering & Art Day game at Goss Stadium.

The Knights (1-0) scored three times in their final two at-bats to erase a 2-1 deficit. Little scored the tying run in the seventh on a two-out RBI single by center fielder Kai Murphy (pictured, above), an Oregon State signee who will join the Beavers this fall.

A graduate of Red Mountain HS in Mesa, Ariz., Murphy was 3-for-4 with a run, an RBI and stolen base and was named the Washington Park Advisors Player of the Game. He is the son of former Arizona State coach Pat Murphy, now a bench coach with the Milwaukee Brewers.

CV grad Briley Knight (Utah) tripled, singled, stole two bases and drove in Murphy with the Knights’ first run in the third inning. A returnee from the 2018 West Coast League championship team, Knight just completed his freshman year with the Utes, where he hit .255 in 28 games, with two homers and 17 RBIs.

Jackson Arnsdorf (Corban) finished up with 2.2 scoreless innings and got the win. He allowed one hit, struck out three and retired the final seven hitters he faced in order.

The Knights resume nonconference play at 7 p.m. Friday with the opener of a three-game series against the Humboldt Crabs in Arcata, Calif. The teams also play at 7 p.m. Saturday and at 12:30 p.m. Sunday.