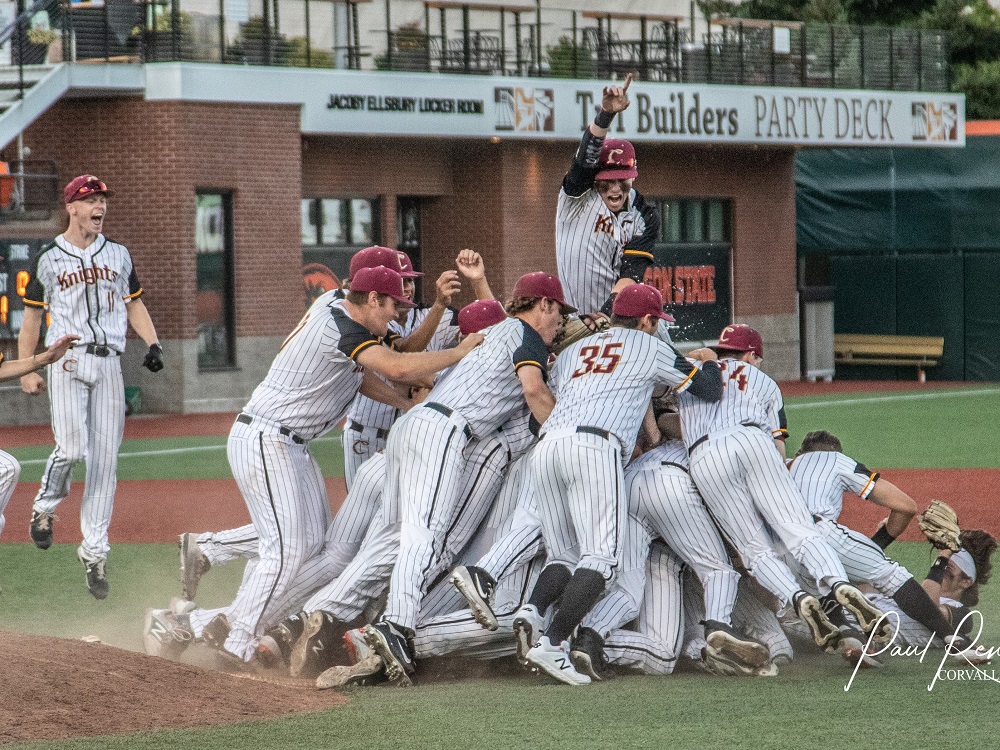 It’s an unprecedented four-peat for Corvallis.

The Knights thrilled a Goss Stadium crowd of 836 by capturing their fourth consecutive West Coast League championship with a 11-1 victory over Victoria in the winner-take-all Game 3 of the WCL Championship Series.

Corvallis also tied a franchise record for victories by going 54-14. They finished on a remarkable 40-8 tear in league contests (regular season and post-season), including an 18-game overall win streak, after a 6-6 WCL start. The Knights won the first- and second-half South Division titles, and established a WCL record with 42 league victories.

“I know it’s cliché and I say it every year, but it’s true, this group is full of great people,” said Corvallis coach Brooke Knight, now 7-3 in the WCLCS.

“We have a ton of guys who are going to play at the next level, and those who don’t are going to do great things too.

“They put in the work every day and responded.”

Shortstop Brooks Lee (Cal Poly) was 3-for-5 with two runs, a double, an RBI and a spectacular defensive play that saved two runs to lead the Knights. Corvallis bounced back in impressive fashion following a 5-2 loss in Game 2 the night before.

The Knights also got a clutch, gutsy start from left-hander Tevita Gerber (Dixie State), the Washington Park Advisors Player of the Game. He allowed one run and four hits in six innings, struck out eight, and steadied himself after a shaky first inning by retiring 13 of the final 15 batters he faced.

“It was amazing. I’ve never been part of a team like this and I loved every single second of it,” Gerber said. “It’s been an amazing experience and I’ll try to carry those things into the fall. It was an unbelievable experience.

“We had a bunch of guys from different backgrounds who all got on the same page and who came together to get a ring. You sacrifice your time and your summer to get that feeling right there and it was worth every second.”

Gerber improved to 2-0 in the playoffs, with 16 strikeouts and a 1.42 ERA in 12.2 innings. He also shut down Walla Walla on four hits and one run over 6.2 innings on Aug. 13 in the opener of the WCL South Division playoffs. He was 9-1 in all games, with nine victories and a no-decision in his last 10 starts.

Gerber turned the game over to reliever Abbott Haffar (UC Riverside) after allowing a lead-off single in the seventh. Haffar then slammed the door shut by retiring eight consecutive HarbourCats before being relieved himself with two outs in the ninth.

Lefty Colton Meyer (Linfield) got the final out on a pop out to Harvey, touching off the celebratory dogpile.

Corvallis scored three times with two outs in the first, on Atwood’s steal of home and a two-run single by Curialle. Lee then saved two runs in the second by gloving a grounder up the middle and then spinning 180-degrees to throw out MacGregor Sharpe for the third out with runners at second and third.

Atwood’s RBI single made it 4-0 in the second. Victoria scored once in the third but the Knights answered with two runs in the home half; Corvallis pulled away with one run in the sixth and two more in the seventh and eighth innings.

The Knights improved to 12-1 all-time in elimination games at Goss Stadium with their second winner-take-all victory of the playoffs. They defeated Walla Walla 6-2 on Aug. 15 in Game 3 of the South Division playoffs to advance to the WCLCS.

Victoria has never won a championship since joining the league in 2013. The HarbourCats also fell to the Knights 2-1 in 2017. Wenatchee has won 5 titles while Bellingham, Bend and Moses Lake have all won one championship each.

Corvallis bumped its franchise record total attendance mark to 59,357 with its final home crowd of 836 at tonight’s WCLCS finale.

The Knights have qualified for the playoffs 13 consecutive years. They are the only team to reach the playoffs in every season since the current divisional postseason format began in 2007.