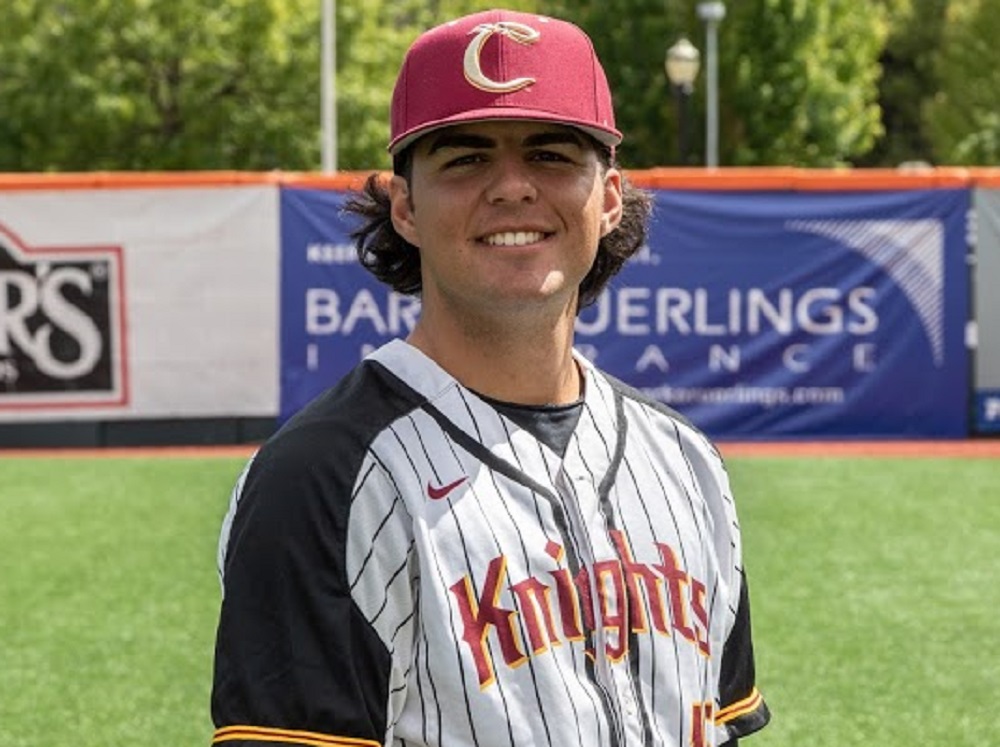 VICTORIA, B.C. – The Knights moved to within one victory of their fourth consecutive West Coast League championship by defeating Victoria 14-8 in the opener of the WCL Championship Series.

The Knights (53-13) bashed four homers at Wilson’s Group Stadium to take a 13-3 lead, and then held on for a 1-0 lead in the best-of-3 series. Left fielder Jake Holcroft (Portland) and shortstop Brooks Lee (Cal Poly) each homered and drove in four runs to lead a 15-hit assault.

The Knights can capture their seventh WCL title by winning Game 2, set for 7:05 p.m. Saturday at Goss Stadium. Right-hander Eric Hill (2-0, 2.95) of Linn-Benton CC will start for the Knights; Victoria’s probable is undetermined.

Starter David Watson (pictured, above) of Utah pitched a season-high 7.1 innings and handcuffed the HarbourCats on five hits until faltering a bit in the eighth. He allowed five runs, as the bullpen allowed two inherited runners to score, but struck out seven in an outstanding effort and got the win, improving his season record to 6-1 in all games.

Moeller gave the Knights a 1-0 lead in the second inning with his homer off the scoreboard in left-center field. Holcroft and Knight went deep in the third inning for a 3-1 lead. Corvallis then broke the game open by scoring seven times in the fourth; the big hits were Holcroft’s two-run double and Lee’s three-run homer.

Corvallis scored twice in the seventh and again in the ninth to offset a late Victoria rally that saw the HarbourCats score five times in their final two at-bats. Reliever Kevin West (UC Riverside) retired the only man he faced on four pitches for the final out, ending a bases-loaded threat.

Corvallis defeated the HarbourCats 2-1 in the 2017 Championship Series, the only other times the teams have met in the postseason. Corvallis won the 2019 season series, going 2-1 at Victoria on June 7-9; Victoria did not play at Goss Stadium this summer.

The Knights earned home-field advantage for the Championship Series by posting the WCL’s best regular-season record (42-12). They set a team and WCL record for most league victories.