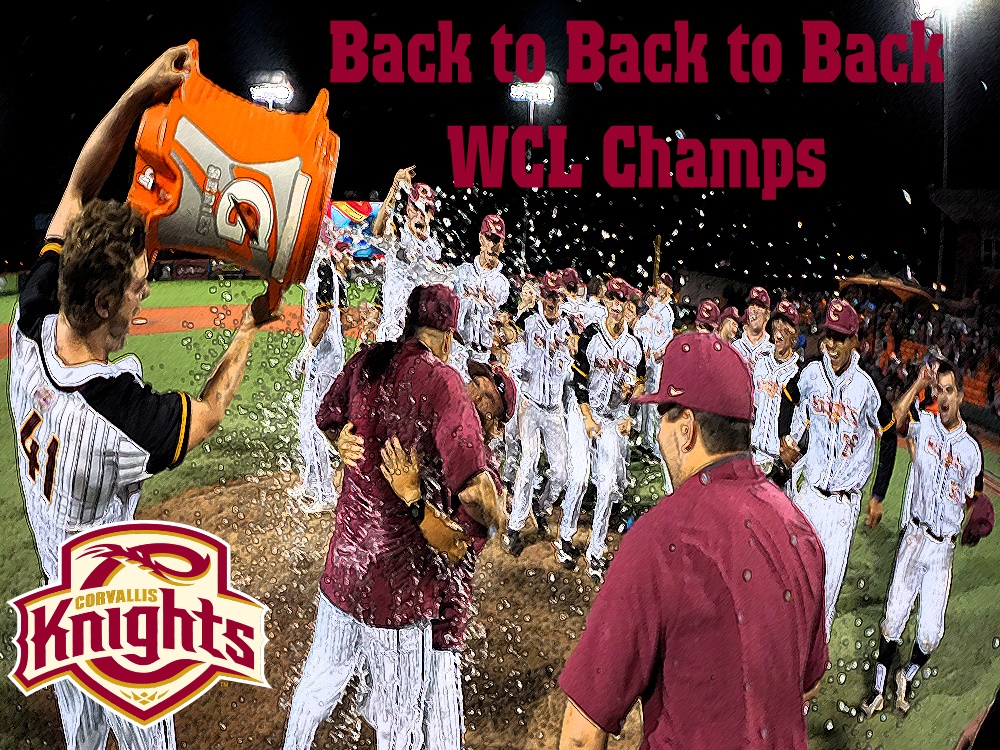 The Knights became the first team in West Coast League history to three-peat when they defeated Kelowna 5-1 before a Goss Stadium crowd of 1,286 to sweep the WCL Championship Series.

“I love this group of guys,” Knight said. “They really were a team you felt [would] find their way, based on the way they treated each other and the way they came to work every day.

“They found their stride. It has been really enjoyable to watch them finish it out.”

A rising junior with the Mustangs, Redmond allowed four hits over 6.2 innings. He struck out eight, walked one, threw 62 strikes in 88 pitches, and allowed only one batter to advance past first base, a solo homer by Garrett Kelly leading off the second inning.

A sophomore-to-be at UCR, Haffar got the final out of the seventh to strand the tying run at first base. He then added two perfect, efficient innings to record the save when shortstop Beau Philip (Oregon State in 2018-19) threw out Dan Pruitt on an acrobatic play from behind second base to end the game.

Haffar, who did not join the Knights until July 8, struck out four of the first five Falcons he faced. He and Louie Crow (San Diego) anchored the back end of the bullpen down the stretch; Haffar was 3-0, 0.71 with two saves in 10 games in the regular season, and 1-0, 0.00 with a save in two playoff appearances.

The Knights trailed 1-0 early but went ahead 2-1 in the third inning on an RBI groundout by catcher Zak Taylor (OSU) and a two-out RBI single by Cody Hawken (Portland).

They squandered several subsequent scoring chances before breaking through in the eighth for three huge insurance runs.

Second baseman Chad Stevens (Portland) made it 3-1 with a sacrifice fly. Pinch-hitter Cole Cabrera (Cal Poly) applied the dagger to the heart with a 3-2, two-out, two-run single to left field for the final margin.

Taylor said Redmond came to play in his biggest game of the season.

“[He was] really competitive first pitch, that’s the biggest thing for him,” Taylor elaborated. “He got ahead of hitters and had both breaking pitches and the changeup working really well.”

“I love being able to stay in Corvallis, the coaching staff here and the ability to move around to different spots,” said Taylor, who caught and played third and first base upon returning to the Knights after winning the NCAA championship with the Beavers. “Guys want to win here.

“Sometimes in summer ball it can be a little lackadaisical. I think guys just want to compete and get after it, that’s the best thing.”

The Knights won 15 of their final 17 regular-season games heading into the playoffs and closed the summer on a 19-2 run following four straight playoff wins. They were 20-2 at Goss Stadium in July and August, with a 17-game winning streak between July 2-Aug. 8.

The Falcons last appeared in the WCLCS in 2015 vs. the Bend Elks, when they lost in two straight games. It was Kelowna’s second appearance in the WCLCS.