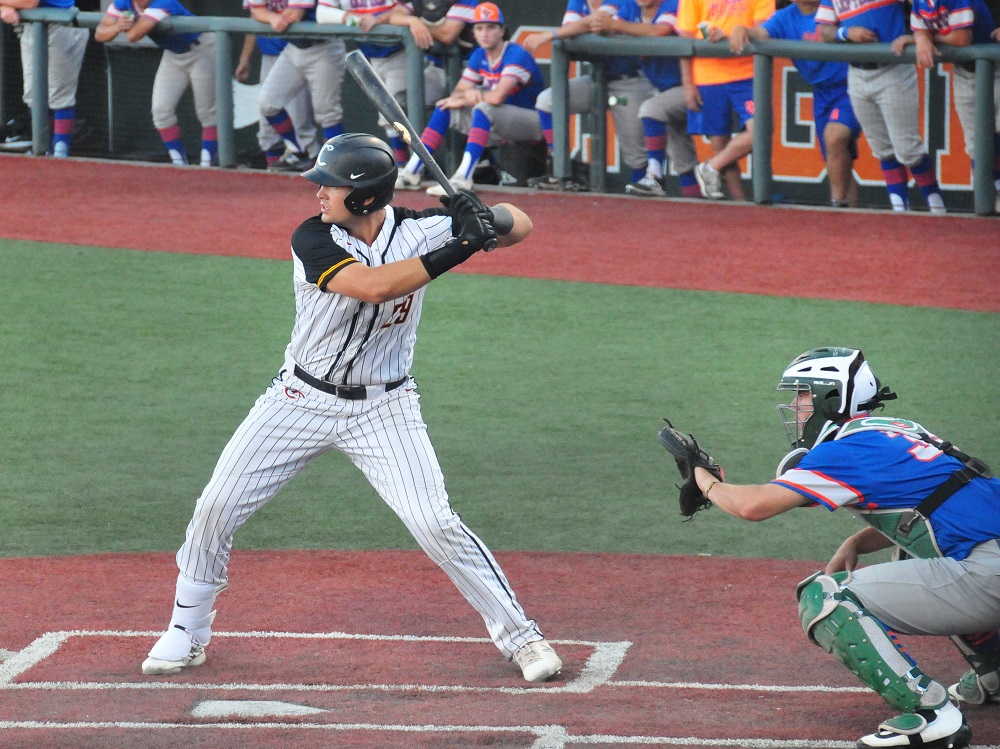 Returnees Trace Tammaro of Portland (pictured) and Elliot Willy of Oregon State propelled Corvallis to a 11-7 victory vs. Cowlitz, as Tammaro blasted a first-inning two-run homer and Willy went 2-for-5 with a RBI double.

Cowlitz jumped all over Knights’ starter David Watson of Utah in the top of the first, plating four runs. But the Knights would charge right back posting their own four spot in the bottom half of the inning much to the delight of the 1,399 in attendance.

Jackson Arnsdorf of Corban and Connor Redmond held Cowlitz at bay before the Black Bears touched up Knights’ relievers Nick Caviglia of Utah and Trace Hokkanen of Mt. Hood CC in the top of the eighth, scoring 3 runs to get within a run.

But in came incoming frosh Kai Murphy of Oregon State, from center field, to strike out the inning’s final batter with runners at second and third base to keep Corvallis ahead, 8-7. He then delivered a big two-out RBI single in the bottom of the inning.

Jake Holcroft of Portland would later deliver a two-out, two-run bases loaded single in the 8th to extend the Knights lead to 11-7.

Oregon State Beavers Matthew Gretler and Jake Harvey made their Knights debuts, and Willy his 2019 season debut. Harvey went 2-for-3 and scored 3 runs.

Future UCLA Bruin Michael Curialle went 2-for-3 with 2 RBIs in his second game with the team and Briley Knight of Utah reached base five times, going 2-for-3 with 3 walks and two runs scored.

Arnsdorf earned the win in relief, and Murphy registered the save.

Corvallis will go for the sweep Sunday, June 16 on Snap Fitness Father’s Day. With the Knights win, Corvallis improved their record to 4-4 in the WCL and 8-4 overall.

Gretler homers, doubles, drives in three in 7-4 win at Cowlitz