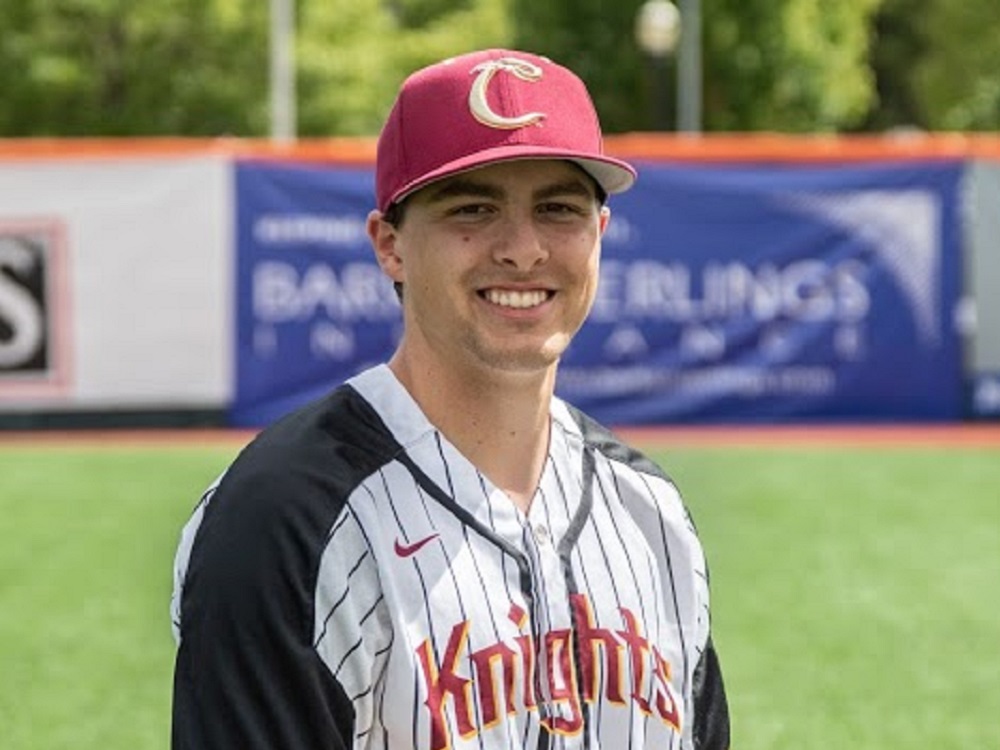 Corvallis (47-12, 39-12 WCL, 18-6 second half) has a three-game edge over North Division champion Victoria for the best overall record, with three games to play. The Knights hold the tiebreaker over the HarbourCats so they would host Game 2 and Game 3 of the WCL championship series, should they advance that far.

The Knights already earned home-field advantage for the South Division playoff series against Walla Walla by winning the first-half championship.

On Thursday, relievers Chase Hokkanen (Mt. Hood CC) and Marques Johnson (Riverside City College) combined to protect a 2-1 lead over four shutout innings. Hokkanen (pictured, above) went three innings; Johnson slammed the door in the ninth for his second save of the series and his third overall.

Hokkanen allowed one hit, walked one, struck out four and retired the final seven Bells he faced in order. Johnson gave up a one-out single in the ninth, but then ended the game on a 6u, 6-3 double play started by shortstop Michael Curialle (UCLA).

The Knights scored their runs in the fifth inning. Tristan King (Texas Rio Grande Valley) lead off with a single and moved to third on a one-out single by Jake Holcroft (Portland), who moved up to second base on the relay throw to the infield.

Andy Atwood (Texas Rio Grande Valley) then grounded a single up the middle through a drawn-in infield to score both runners. Atwood now has 28 RBIs, tied for third on the team.

Corvallis starter Abbott Haffar (UC Riverside) allowed four hits and an unearned run in five innings, with four strikeouts, to earn the victory. He has allowed just one earned run in his last 14 innings over three starts, lowering his ERA to 1.35.

The Knights won all three games at Bellingham by one run, prevailing 5-4 on Tuesday and Wednesday. They snapped out of a late-season slump by going 6-1 on a seven-game road trip to Cowlitz, Port Angeles and Bellingham.

Corvallis also established a franchise record for most WCL victories in a season with 39. The old record was 38, set in 2009 over a 48-game league schedule.

The Knights clinched the first-half South Division title on July 6, earning an automatic playoff berth and home-field advantage in the best-of-3 divisional round, which begins on Aug. 13 at Walla Walla.

The best-of-3 Championship Series begins on the road on Aug. 17.