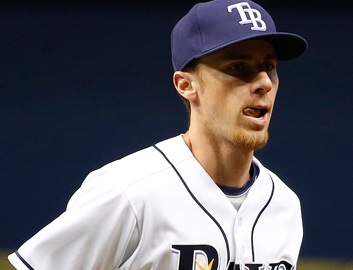 Happy Monday, everyone, from the world-wide headquarters (WWHQ) of the Corvallis Knights, your 2016-2017 West Coast League champions!

We were away for a quick trip to the East Coast last week for a short family reunion, and didn’t write our customary Friday Blog. So instead of waiting another day until Tuesday, we’ll go a day early this week to end the drought of Knights’ news.

Former Knights’ star shortstop Matt Duffy (2010, pictured above) has agreed to a one-year contract with the Tampa Bay Rays, avoiding arbitration. The Long Beach State product missed the entire 2016 season while recovering from Achilles tendon surgery. He hit .276 (21-76) with Tampa Bay in 21 games in 2016 after being acquired in a trade with San Francisco.

Matt is projected to be Tampa Bay’s starting third baseman, with the trade of longtime Rays’ star Evan Longoria to San Francisco. Here is more on that story from MLB.com. He will be the second alum on the 2018 Rays, joining pitcher Matt Andriese (2009).

Best of luck to Matt, and here’s to a full, healthy season.

Alum Nick Madrigal (2015) of Oregon State, the 2017 Pac-12 Conference Player and Defensive Player of the Year, was named a preseason first-team All-American by Perfect Game last week. It is his second such honor this season; he also earned first-team honors from Collegiate Baseball.

A junior infielder from Elk Grove, Calif., Madrigal was the second player in the last two decades to earn Pac-12 Player of the Year and Defensive Player of the Year honors in the same season. He was also named a unanimous All-American in 2017, earning recognition from all six teams.

Nick  was also the first Beaver to earn an ABCA/Rawlings Gold Glove, an honor he received in 2017. Best of luck to Nick in what is probably his final season in college baseball. He was our MVP in 2015.

As you may have already read on our homepage, Knights’ chief operating officer Holly Jones is leaving the team after three seasons. Her last day on the job will be Jan. 26. Please click here for more on Holly’s decision.

That’s all for today. Have a great rest of your week, and we will see you again on Friday.