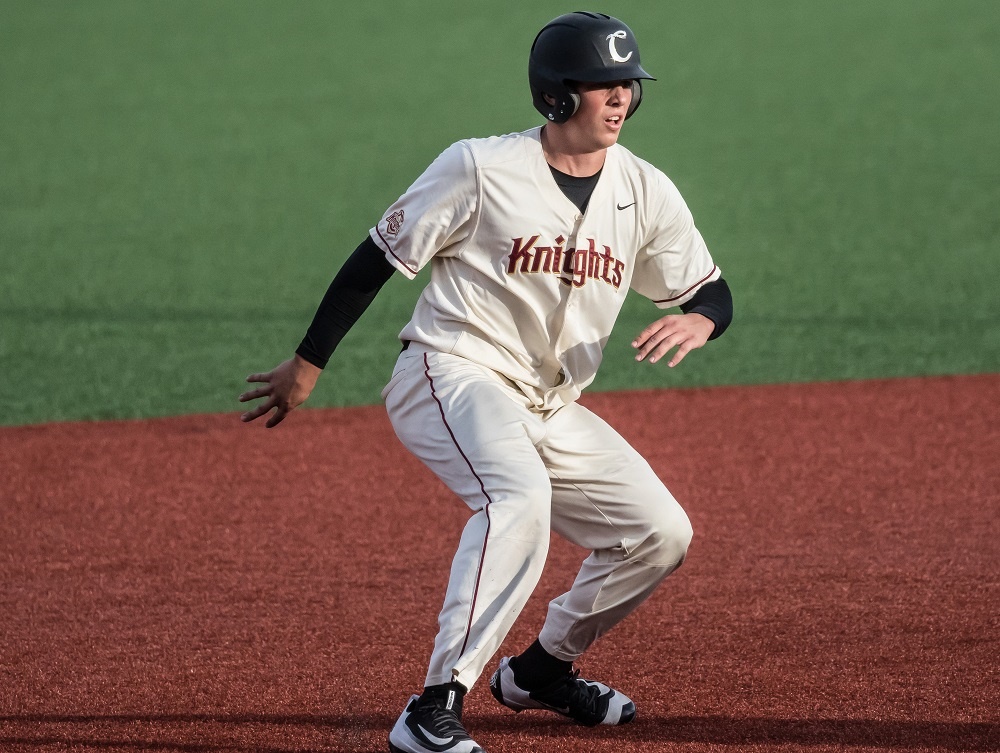 Happy Friday, everyone, from the world-wide headquarters (WWHQ) of the Corvallis Knights, your 2016-2017 West Coast League champions! Our May 30 opener with the Portland Sea Dogs is just 47 days away, so get ready for another great summer of Knights’ baseball!

Big news from Oregon State. Alum Adley Rutschman (2016, pictured above), a sophomore catcher for the Beavers, has accepted an invitation to compete for the USA Baseball Collegiate National Team this summer.

“I am extremely humbled that I was even considered to be selected to play for Team USA,” Rutschman said. “It has always been a dream of mine to be able to represent my country.”

Heading into this weekend’s series at Missouri State, Rutschman leads OSU with a .383 batting average, is second with 31 RBIs and is tied for second with 10 doubles. He also has two triples, three home runs, and a 19-16 walk-strikeout ratio.

Based in Cary, N.C., the USA Baseball Collegiate National Team will participate in three international friendship series in 2018, beginning with the 18th USA vs. Chinese Taipei International Friendship Series in North Carolina from June 28-July 2.

The U.S. will then compete in the 42nd USA vs. Japan Collegiate All-Star Series from July 3-9 in Georgia, North Carolina and South Carolina, and the seventh Annual USA vs. Cuba International Friendship Series in Cuba from July 13-18.

Congrats to Adley, whose father, Randy Rutschman, is a former Knights’ assistant coach and a member of the Board of Directors.

Outfielder Nick Torres (2012) has signed with the Kansas City T-Bones in the independent American Association. The former Cal Poly standout was released earlier this spring by the Padres after four years in their organization. Please click here for more on that story.

Delmarva (A South Atlantic, Orioles) pitcher Cameron Bishop (2015, 2016) allowed just two runs in seven innings and had six strikeouts in a 2-0 loss to Lakewood on Thursday night to earn Corvallis Knights Minor League Player of the Day honors. He played at UC Irvine.

*Buffalo (AAA International, Blue Jays) pitcher Sam Gaviglio (2009) threw four scoreless innings and had four strikeouts but was not involved in the decision in a 2-1 loss to Indianapolis. He played at Oregon State.

*Reno (AAA Pacific Coast, Diamondbacks) closer Jimmie Sherfy (2011) allowed one run and had one strikeout in one inning and earned his first save in a 5-4 win over Sacramento. He played at Oregon.

Time to update the college stats of our incoming college pitchers. We will do the position players next Friday.

MILES GLAZIER: The lefty from UC Irvine is redshirting this spring.

ABBOTT HAFFAR: The righty from UC Riverside is 0-1, 7.20 in eight games, with six strikeouts in 10 innings.

CONNOR REDMOND: The righty from Cal Poly is 0-2, 7.56 in eight games, with seven strikeouts in 8.1 innings.

TREVOR WELLS: The righty from Linn-Benton is 0-0, 0.96 in six games, with five saves and seven strikeouts in 9.1 innings.