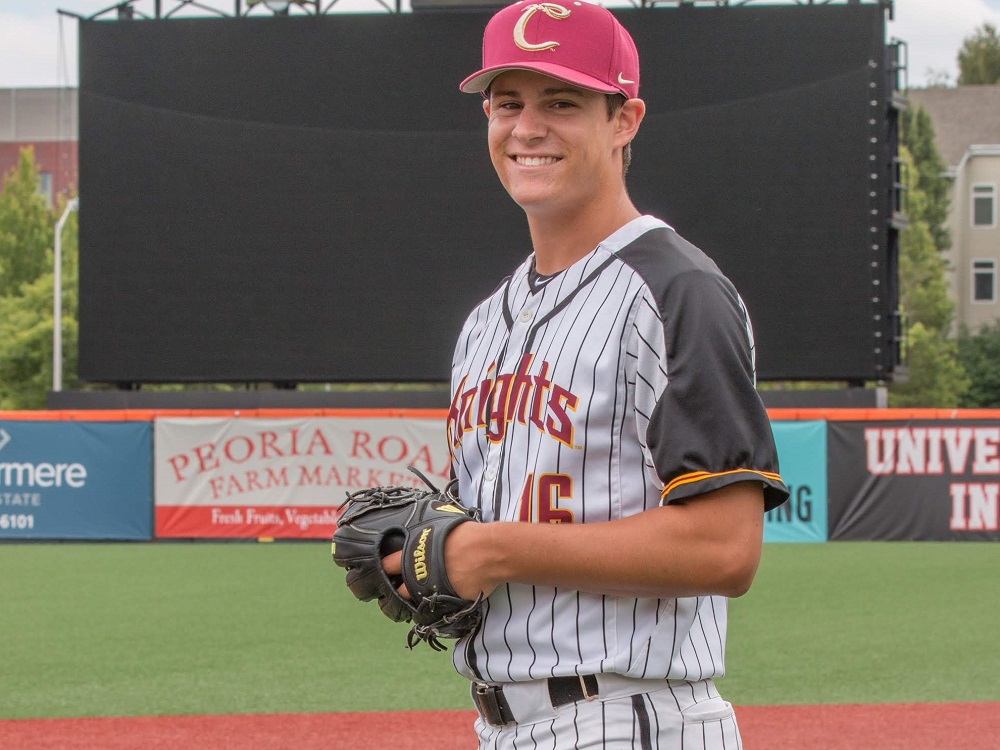 The Knights stayed as hot as the weather with a 7-1 victory over Port Angeles at Goss Stadium in the finale of their West Coast League series.

Starter Brendan Beck of Stanford (pictured, above) – who ended Saturday night’s 9-8 win with a walkoff single – went 5.1 innings on a blistering 98-degree afternoon and stymied the Lefties on one run and five hits, with five strikeouts. He threw 49 strikes on 72 pitches.

Jacob Fricke (Western Oregon), Louis Crow (Cal Poly-Pomona in 2018-19) and Kolby Somers (Portland) finished up with 3.2 innings of scoreless relief. They combined for four strikeouts and one hit allowed.

Cabrera and first baseman Trace Tammaro (UP in 2018-19) had two RBIs each.

Bourassa (4-1, 2.58) is the scheduled starter; he and five others are tied for the WCL lead in victories. Game time is 6:35 p.m. at Civic Field in Port Angeles.

The Knights resume WCL action at Victoria on Wednesday. Their next home game is July 24 vs. Kelowna.

Also, the Knights have signed infielder Ben McKay, a 5-foot-11, 190-pound sophomore from Wenatchee Valley College in Wenatchee, Wash., his hometown. He will join the team in Victoria.

Right-hander Connor Redmond (pictured, above) of Cal Poly stymied Kelowna and the Knights topped the…

Shrum Doubles, Singles, Has RBI in 6-2 Loss to Bellingham