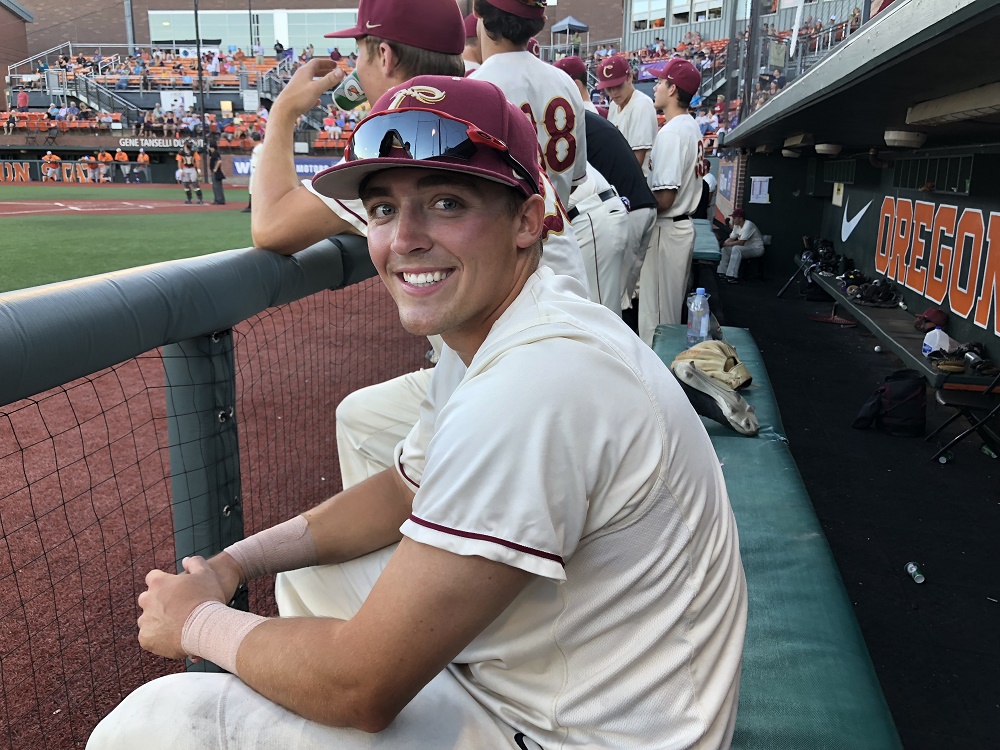 Right fielder Austin Feist (pictured, above) had three hits and four RBIs to lead the Knights to a 9-8 victory over Port Angeles on in a West Coast League game at Goss Stadium.

A senior-to-be at St. Martin’s, Feist homered, singled twice, scored twice and stole a base as the Knights (23-15-1, 20-13 WCL, 4-2 second half) won the series and stayed in first place in the second-half South Division pennant race.

Pitcher/infielder/DH Brendan Beck (Stanford) had three hits and played an equally-important role. He drove in the winning run in the bottom of the ninth after the Lefties had tied the game with a two-out solo homer in the top of the ninth.

Left fielder Cody Hawken (Portland) was hit by a pitch leading off the ninth. He went to second on a wild pitch, and to third on a sacrifice bunt. Beck then lined a 1-0 pitch over shortstop for the win.

Corvallis scored four times in the first and three times in the second to build an early 7-0 advantage. It led 8-2 after four, but the Lefties scored five unearned runs to draw within 8-7 before finally tying it with two outs in the ninth.

Earlier Saturday, Hawken was named to the South Division roster for Tuesday’s WCL All-Star Game in Port Angeles. He replaces Portland outfielder Xander Clarke, who signed with the San Francisco Giants this week.

Hawken will also represent the Knights in the game’s Saltwater Splashdown Home Run Derby on Monday night. Participants will hit from a raised platform at Hollywood Beach, trying to clear a rope connected to anchors more than 300 feet offshore in the harbor.

Toplikar Shines in Knights’ Debut in Loss to Cowlitz