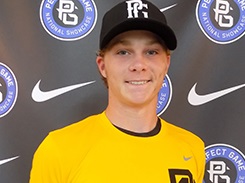 We have signed incoming University of San Diego outfielder Kingston Liniak and pitcher Jake Miller for the 2018 season.

Liniak (pictured, above) is a 6-2, 170-pounder from Mission Hills High School in San Marcos, Calif. He is the son of Cole Liniak, a former major-leaguer for the Chicago Cubs. The younger Liniak sat out the 2017 high school season with a leg injury after earning Perfect Game Underclass recognition in 2016 and 2017.

We open the 2018 season on May 30 with the seventh-annual Science, Engineering & Arts Day game against the Portland Sea Dogs. We begin WCL play at Kelowna on June 6; our WCL home opener is June 12, against Wenatchee.

Abbott Haffar, a freshman pitcher-outfielder at UC-Riverside, has signed with the Knights for the 2018 season. He is a 6-foot-1, 185-pound right-hander from Simi Valley High School in Simi Valley, Calif.

He was a key member of a UCR recruiting class that was ranked 35th nationally by Baseball America and earned 2017 California Region honorable-mention honors from Perfect Game.

Knights’ Chief Operating Officer Holly Jones was named the Eugene Register-Guard’s Volunteer of the Month for November. The award recognizes her efforts with the 2017 Coats for Kids drive, an annual event managed by the Eugene Active 20-30 Club. For more details, please click here.

See you at Goss! Opening day is just 188 days away!

That’s all for today. Have a great week and we will see you again on Friday.