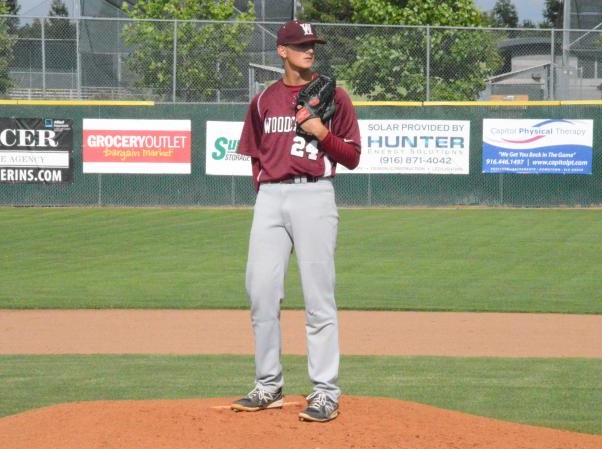 We have signed pitcher Dennis Boatman (pictured, above) of Woodcreek High School in Roseville, Calif., for the 2018 West Coast League season. He will be a freshman at UCLA in 2018-19. He will be the first Bruin in Knights’ history.

“He is another strong right-handed pitcher that is only going to get better as he gets older,” Savage said. “He has a very competitive mind and loves to work hard and get better.

“He has a fastball, slider and changeup but we think he will throw very hard down the road. With his athleticism and competitiveness, we think he will be a really good match for our program.”

Welcome to the Knights, Dennis!

He was selected in the 13th round of the 2014 MLB draft by Colorado and has played at every Rookie and Class A level in their organization.

However, the Tampa Bay Rays did not protect outfielder Cade Gotta (2011), who therefore is available for selection. He spent last season with Durham of the triple-A International League and Montgomery of the double-A Southern League and hit a combined .278 (120-431) in 120 games, with five homers and 52 RBIs.

Gotta was selected in the 26th round of the 2014 MLB draft and has steadily moved up through the Rays’ organization after leaving San Diego Christian University. He is a career .274 hitter in 350 minor-league games.

The Rule 5 draft prevents teams from stockpiling minor-league talent not on their 40-man MLB roster.

Players first signed at age 18 must be added to 40-man rosters within five seasons or they become eligible to be drafted by other organizations through the Rule 5 process. Players signed at 19 years or older must be protected within four seasons.

Clubs pay $50,000 to select a player in the Major League phase of the Rule 5 Draft. If that player doesn’t stay on the 25-man roster for the full season, he must be offered back to his former team for $25,000.

We are thrilled to introduce the perfect gift for the baseball fan in your family, the Knights Holiday Home Run Package. For more information, please click here or call (541) 752-5656.

See you at Goss! Opening day is just 185 days away!

That’s all for today. Have a great weekend and we will see you again on Tuesday.