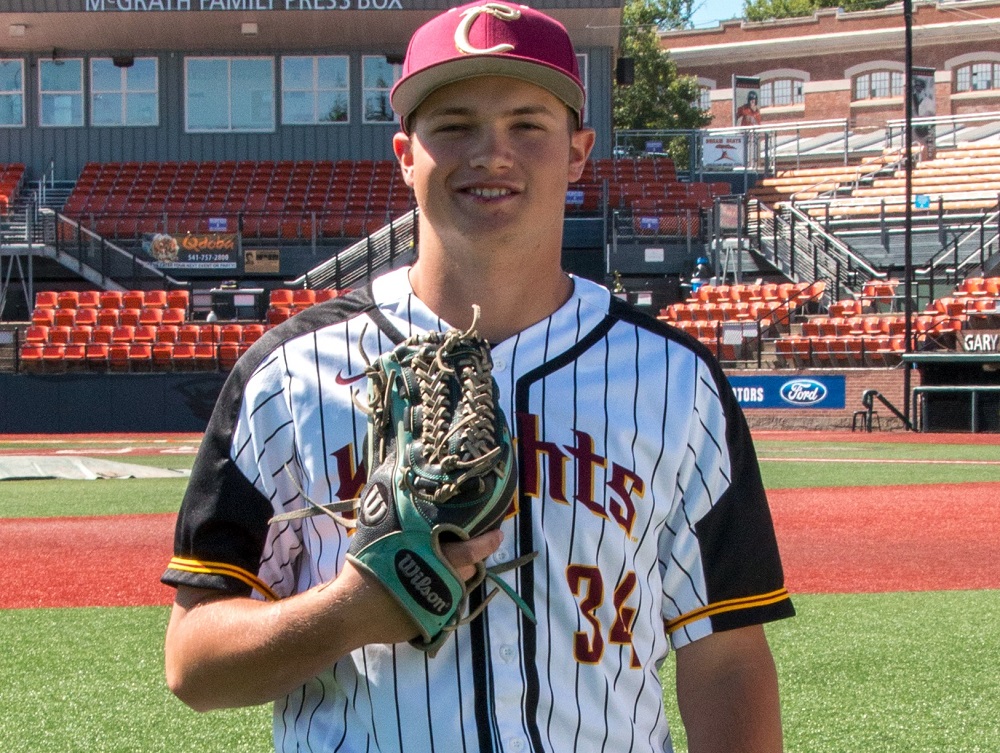 CORVALLIS, Ore. –  Reliever Kolby Somers was an unlikely hero for the Knights in their 3-2 nail-biter over Yakima Valley in the decisive Game 3 of the WCL South Division playoff series at Goss Stadium.

An incoming Oregon freshman from Century High School in Hillsboro, the lefty retired all six Pippins he faced in the eighth and ninth innings to post his first save of the summer. He struck out two and threw 14 strikes in 16 pitches in a lights-out performance that eliminated the Pippins and capped a tremendous home-field comeback by the defending WCL champions.

“When you come into these high-pressure situations, you really just have to take a deep breath and focus on throwing strikes,” Somers said. “That’s that’s what I did today and it worked out for us.”

Corvallis (42-21) advances to face Victoria in the best-of-3 WCL Championship Series, which starts Saturday at Royal Athletic Park in Victoria. The HarbourCats beat Kelowna 11-5 and 8-2 to sweep their North Division playoff series and earn their first berth in the finals.

Corvallis will host Game 2 on Monday and Game 3 (if necessary) on Tuesday. Both games will start at 6:40 p.m. It will be the ninth championship appearance in 11 seasons for the Knights in Corvallis. The Knights are 4-4 all-time in the finals. They defeated Bellingham 2-1 to win the 2016 crown.

Somers was 1-1, 5.06 in six regular-season appearances. He struggled in his last three outings, allowing five runs and eight hits in 4.2 innings for a 9.64 ERA.

He was razor sharp on Thursday. He needed only seven pitches to retire the Pippins 1-2-3 in the eighth inning, and got a strikeout, a fly ball to center and a strikeout on nine pitches to finish the ninth.

“My breaking ball was working really well,” Somers said. “We’re here to win the entire thing and this was the first step.”

The Knights scored the winning run in the seventh. With one out, Matt Kelly (Portland) and Jordan Qsar (Pepperdine) singled and Dillan Shrum (Nevada-Reno) walked to load the bases. Zak Taylor (Oregon State) then lined a sacrifice fly to center field, scoring Kelly.

Corvallis went up 1-0 in the first on an RBI single by Shrum, but Yakima Valley tied it in the second on a solo homer by Mitch Ellis. The Knights went ahead again 2-1 in the fourth on an RBI single by Chad Stevens (Portland) , but the Pippins drew even again 2-2 in the seventh.

The Corvallis bullpen was outstanding throughout the series, giving up just one earned run in 10.2 combined innings, a 0.88 ERA, even though closer Chase Kaplan (Kansas) and reliever Louis Crow (San Diego) were unavailable because of injury.

Jacob Fricke (Western Oregon) and Trevor Wells (Linn-Benton CC) allowed one unearned run in the final 4.2 innings of a 9-3 loss at Yakima on Tuesday. Hazahel Quijada (UR Riverside) threw two scoreless innings and got the save in an 8-4 win on Wednesday night, and Glazier and Somers allowed one in four innings on Thursday.

VICTORIA, B.C. – Corvallis scored twice in the top of the ninth to break a…