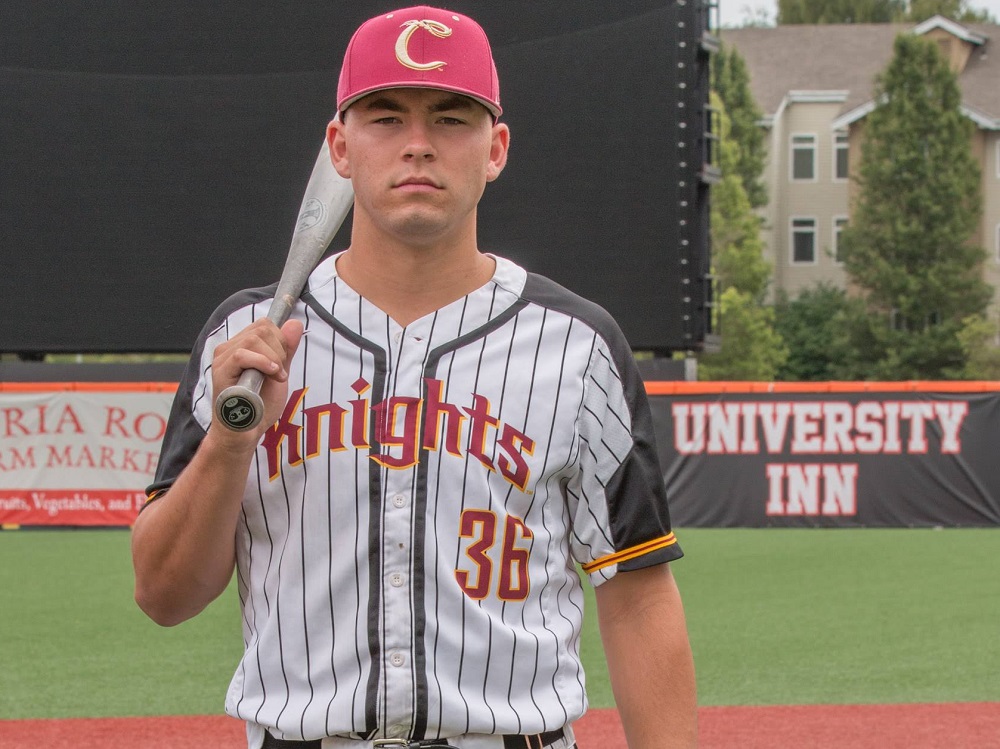 YAKIMA, Wash. – Yakima Valley parlayed a leadoff walk into the winning run to walk-off the Knights 7-6 on  in a West Coast League game at Yakima County Stadium.

Victor Cerny’s one-out double scored Bryce Wooldridge from second with the deciding run. He was pinch-running for Chris Arpan, who was walked by reliever Brendan Beck (Stanford) leading off the inning and sacrificed to second.

Catcher Sam Olson of San Jose State and nearby Sheldon High School in Eugene (pictured, above) singled, doubled and drove in three runs to lead the Knights (21-15-1, 18-13 WCL, 2-2 second half). They lost the last two games of the series after winning the opener on Tuesday.

The Knights trailed 3-0 after the first inning but erupted for four runs in the sixth to erase that deficit. Chandler Anderson’s (Utah) RBI single scored Chad Stevens (Portland) for their first run; Austin Feist (St. Martin’s) then slammed a two-run homer to tie the game.

Cody Hawken (Portland) then singled, moved to second when Trace Tammaro (Portland in 2018-19) was hit by a pitch, and scored on Olsson’s double.

Yakima Valley went back ahead 6-4 but Olsson drove in two more in the top of the eighth with a two-run single to knot the score 6-6.

The Knights return home on Friday for a three-game series against Port Angeles. Portland righty Connor Knutson (1-0, 3.46) is the scheduled starter for the Knights; the probable for Port Angeles is TBA.