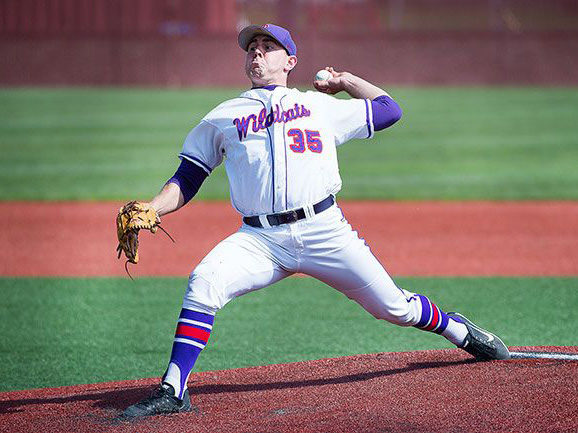 WALLA WALLA, Wash. – The offensive struggles continued for the Knights on Friday in a 2-0 West Coast League loss to Walla Walla on opening night for the Sweets at Borleske Stadium.

The Knights (2-4, 1-2 WCL) were held to just four hits by four Sweets’ pitchers and saw their scoreless streak extended to 17 innings in a row over two games. They had just one hit on Thursday in a 2-1, 11-inning loss at Bellingham.

Corvallis advanced runners to second and third with two outs in the top of the ninth, but a groundout ended the budding threat.

Knights’ starter Cason Cunningham (Linfield, pictured above) allowed one run and three hits in 5.1 innings, with six strikeouts. He left with a run in and runners at the corners in the sixth; reliever Josh McDaniel (Linn-Benton CC) prevented further damage by retiring the next two hitters.

McDaniel finished up and allowed another run in the seventh. The two combined for just four hits allowed, and eight strikeouts.

The series resumes at 6:35 p.m. Saturday. Righty Landen Bourassa (0-0, 0.00) of San Francisco is the scheduled starter for the Knights; the Sweets’ projected starter is TBA.

The series concludes at 4:35 p.m. Sunday; starters for both teams have not been announced. The Knights will open the home portion of the WCL schedule at 7:15 p.m. Tuesday against the Wenatchee AppleSox at Goss Stadium.