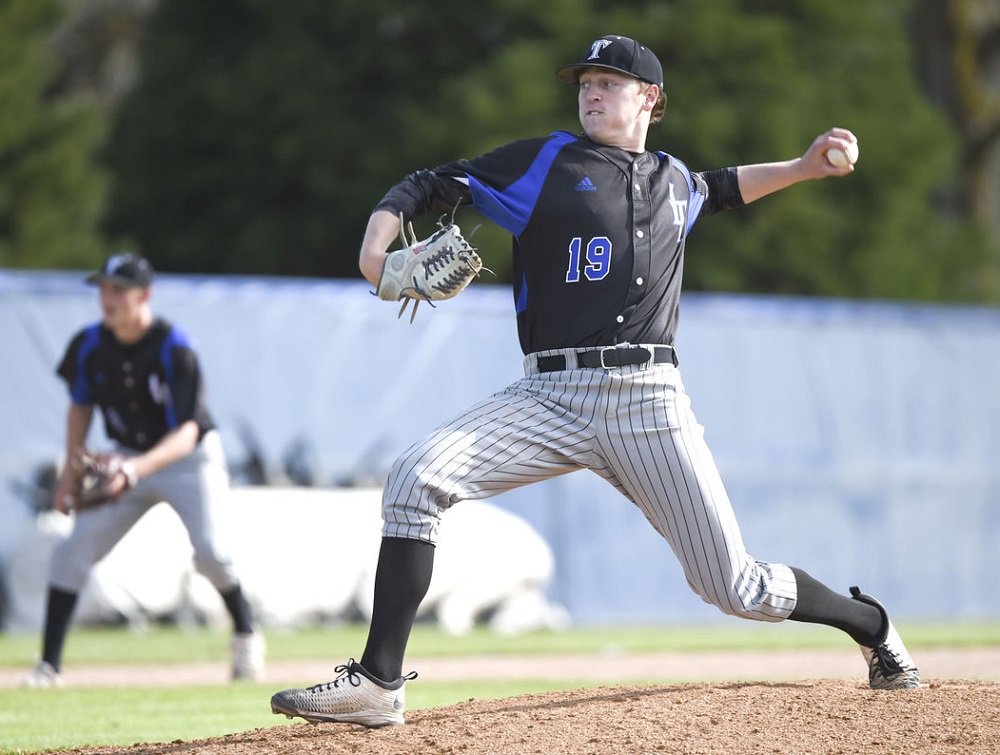 BELLINGHAM, Wash. – Austin Crowson (pictured, above, by Amanda Loman of the Corvallis Gazette-Times) took a no-hitter into the seventh inning as the Corvallis Knights defeated Bellingham 4-3 in Game 1 of a West Coast League doubleheader at Joe Martin Field.

The Bells bounced back to take the nightcap 2-1 to salvage a split on the day. However, the Knights (6-1 all, 5-1 WCL) won the series, as they also prevailed 4-3 on Friday night in a rematch of the 2016 WCL Championship Series.

Corvallis also clinched a winning record on its season-opening nine-game road trip. They swept Cowlitz in Longview, Wash., on June 2-4 and then took 2 of 3 from the Bells this weekend.

A native of Monroe who played at Lane Community College, Crowson entered the seventh inning of the seven-inning game having allowed just two first-inning walks. The leadoff batter in the seventh hit a ground-ball single to left field; he walked the next batter and was replaced.

The Bells eventually drew within 4-3 with two outs before reliever Cameron Richman (Portland) thwarted the comeback by getting the final out with the bases loaded. Crowson had five strikeouts.

Qsar relieved Crowson after a hit and a walk to lead off the inning and got two outs. Two hits brought the Bells to within 4-3 and he was replaced by Richman, who walked the first batter he faced to load the bases.

Richman then went 3-0 on the next batter, but threw a strike and then induced a grounder to shortstop to end the game and to earn his first save of the season.

The Knights led the nightcap 1-0 before the Bells scored twice in the last of the fifth. Corvallis had the tying run at second with two outs in the seventh but could not push it across. Starter Ross Massey (Tulane) had a strong effort and allowed just four hits.

The Knights now head to Bend for a Sunday-Tuesday series with the Elks, their longtime South Division rival. Sunday’s game begins at 5:05 p.m.; lefty Tanner Cantwell of Treasure Valley CC (0-0, 0.00) is the scheduled starter.

The Knights open their home WCL schedule against the Port Angeles Lefties, the WCL’s newest franchise, at 6:40 p.m. Wednesday.

The Port Angeles series continues through Friday. The Knights then conclude their opening homestand by hosting Cowlitz on June 17-19.