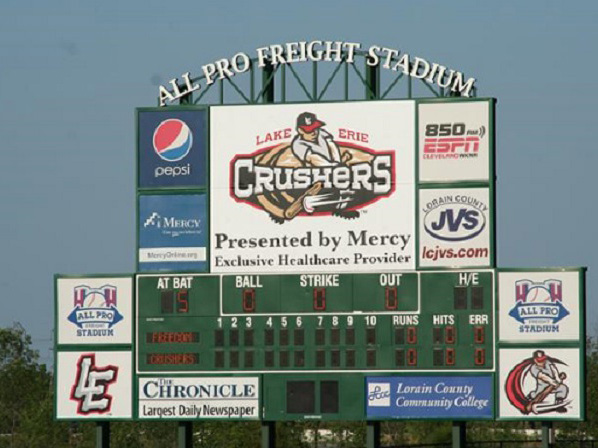 Happy Tuesday everyone, from the world-wide headquarters of your 2016 West Coast League champions, your Corvallis Knights!

A quick check of the Frontier League’s rosters indicated only one alum is playing in the independent circuit this season, third baseman Cody Lenahan. He came to the Crushers in a trade with the Lincoln Saltdogs of the American Association.

The former University of Portland standout was a key member of our 2013 WCL champions. He’s hitting .222 (4-18) through the first four games, with no homers or RBIs.

The Crushers play at Sprenger Stadium in Avon, Ohio, their home since their inception in 2009. Built and owned by the city of Avon, the stadium has a capacity of 5,000 seats, including 3,000 box seats, 11 private suites, four-person terrace tables, berm seating and picnic and patio areas for group outings. The playing surface is artificial turf.

Nice story by reporter Danny Moran in The Oregonian on Oregon State freshman Adley Rutschman, the starting catcher for the No. 1-ranked Beavers. Please click here for more on Adley, the son of ex-Aloha Knights player and coach Randy Rutschman.

Winston-Salem (A Carolina, White Sox) pitcher Max Beatty (2010-12) threw 1.2 innings of shutout relief, had two strikeouts and got the win in a 3-2 victory over Lynchburg on Monday night to earn Corvallis Knights Minor League Player of the Day honors. Max played at Pacific Lutheran.

Time to update the stats (through Monday) of our incoming position players. We will do the pitchers on Friday.

HENRY CHENEY: The Portland outfielder is hitting .091 (1-11) in six games, with no homers or RBIs.

The Wenatchee AppleSox have signed Jacob Prater, a 2015 Wenatchee High School graduate and future Seattle University Redhawk, to the 2017 roster. They have also signed Yakima Valley CC pitcher Gerald Hein to a temporary contract. Click here for full details on those transactions, from Our Sports Central.

That is all for today. Have a great week, try to make it to the ballpark this weekend, when the Beavers host Washington State, and we will see you again on Friday.