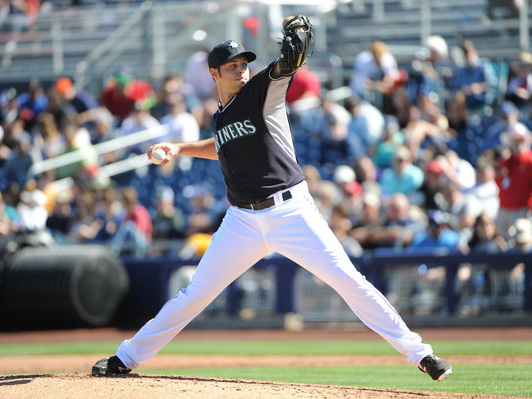 Happy Friday everyone, from the home of your 2016 West Coast League champions!

The Knights now have another alum in the major leagues. The Seattle Mariners recalled right-handed pitcher Sam Gaviglio (2009) from triple-A Tacoma this week. He fills a roster opening created by a shoulder injury to starter Hisashi Iwakuma. He made his MLB debut on Thursday night and allowed one run on two hits in two innings, with four strikeouts.

A former star at Oregon State, Sam was a fifth-round pick by the St. Louis Cardinals in the 2011 MLB draft. He was 2-3, 3.31 in five games at Tacoma this season, with 16 strikeouts and only three walks in 32.2 innings.

Earlier this year, he pitched for Team Italy in the World Baseball Classic.

“It’s a dream come true,” Gaviglio told the Seattle Times newspaper. “I’ve been waiting for this to come for a while now. I just tried to take some momentum from the WBC and hit the ground running.”

Congrats to Sam, who becomes the third pitcher from our 2009 team to make the big leagues. Matt Andriese made his MLB debut with Tampa Bay in 2015; Tyler Anderson debuted with Colorado in 2016.

A 6-foot-1, 185-pound sophomore left-hander from Catholic High School in Baton Rouge, La., Massey was 10-3 with a 2.29 ERA and 51 strikeouts in 90 innings as a freshman. He earned Louisville Slugger/Collegiate Baseball Freshman All-American honors, was a second-team American Athletic Conference all-star, and an NCAA Oxford Regional all-star.

The Knights are the defending WCL champions. They open the 2017 season at Cowlitz on June 2; their home WCL opener is June 14 against Port Angeles.

We have also signed pitchers Hazahel Quijada, a returnee from 2016, and Nick Morales for the 2017 season.

A sophomore left-hander at UC Riverside, Quijada was a key starting pitcher for our 2016 West Coast League championship club. He earned honorable-mention all-WCL honors while going was 3-0 with a 0.83 ERA in eight WCL regular-season appearances.

Morales is a senior at Saint John Bosco High in Bellflower, California, who has signed with San Jose State. A right-hander, he was named an honorable-mention preseason All-American by Perfect Game.

A couple transactions from the independent baseball involving Knights’ alums:

The Evansville Otters have released outfielder Joe DeRoche-Duffin (2013-14), who they received in a trade with the Sioux City Explorers of the American Association.

The Lake Erie Crushers have signed third baseman Cody Lenahan (2013), who they received in a trade from the Lincoln Saltdogs of the American Association.

Nice story by Corvallis Gazette-Times reporter Jesse Sowa on Lane Community College pitcher Austin Crowson, a 2017 Knight. The Monroe native will join us after the Titans finish their season.

Please click here for more on Austin, a future University of Nevada player who should be a great addition to our pitching staff.

Time to update the stats (through Wednesday) of our incoming pitchers. We will do the position players on Tuesday.

That is all for today. Have a great weekend, and we will see you again on Tuesday.

Brooks Hatch Blog: Sweets in Town for First Time Since 2014