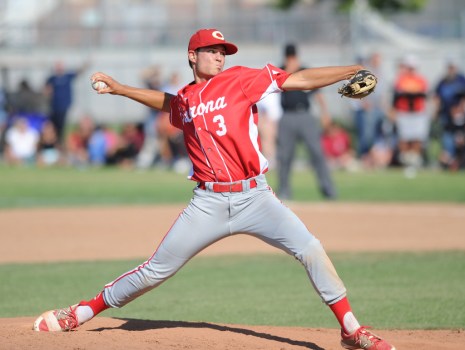 Stanford University freshmen pitchers Brendan Beck (pictured, above) and Jacob Palisch have signed with the Knights of the West Coast League for the 2018 season, coach Brooke Knight announced Thursday.

Beck is a 6-foot-2, 190-pound right-hander who also plays infield. He graduated from Corona High School in Corona, Calif., where he was a two-time Big VIII League first-team all-star, and the league’s co-MVP as a senior.

He was 6-0, 0.35 in 16 games as a pitcher, with eight saves, was named the CHS Athlete the Year, and earned all-section and all-state honors. His older brother, Tristan, also pitches for Stanford.

Palisch is a 6-5, 190-pound lefty from Jesuit College Prep High School in Richardson, Texas. He was a 2016 MaxPreps All-American, a first-team all-district and state tournament MVP, and the captain of his football and baseball teams as a senior.

They are the first players with Stanford connections to play for the Knights since 2012, when Cardinal incoming freshman catcher Austin Barr played in Corvallis.

Tony played outfield for the Knights in the late 1970s and also played at Portland State following his graduation from Cleveland High School.

We released our 2018 schedule on Monday. It features 32 home dates at Goss Stadium.

See you at Goss! Opening day is just 195 days away!

Happy Wednesday, everyone, from the world-wide headquarters (WWHQ) of the Corvallis Knights, your 2016 West…