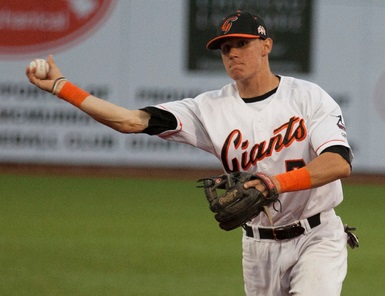 The 6-fooot-2, 185-pounder is a redshirt junior infielder at Eastern Kentucky, an Ohio Valley Conference school located in Richmond, Ky. He played at Lower Columbia College in Longview, Wash., the past two seasons.

Conklin hit .276 (40-145) in 45 games, with no homers, 20 RBIs and eight steals in 10 attempts in 2017, when he earned second-team Western Region all-NWAC honors. LCC went 40-10 and captured the Northwest Athletic Conference championship.

Conklin played for Fort McMurray (Alberta) Giants in the Western Major Baseball League last summer. He hit .208 (25-120) in 37 games, with no homers and 10 RBIs.

He was a 5A all-state player, a Mid-Willamette Conference all-star, and a member of the South team at the Oregon All-Star Series as a CV senior in 2014, when he hit .477 with two home runs, 16 doubles and 43 RBIs. He was also all-conference as a junior.

Corvallis is the two-time defending WCL champions. The 2018 schedule will be announced later this fall.

We are celebrating our five WCL Championships with 50 percent off all merchandise, excluding the 2017 WCL championship shirts. The offer is valid at our office, located on Jefferson Avenue in downtown Corvallis, or via phone orders.

Please click here for inventory. The sale lasts through Oct. 31. Don’t miss out!

The Yakima Valley Pippins have re-signed Conner White, a right-handed pitcher from the University of Portland who earned All-Star and All-West Coast League recognition in 2017, for the 2018 season.

The Woodinville, Wash., native led the WCL with 11 saves during the regular season. In 22 appearances, White struck out 32 and walked 14 in 24 innings pitched, allowing just 14 hits and compiling a 1.13 ERA. Please click here for more on that story.