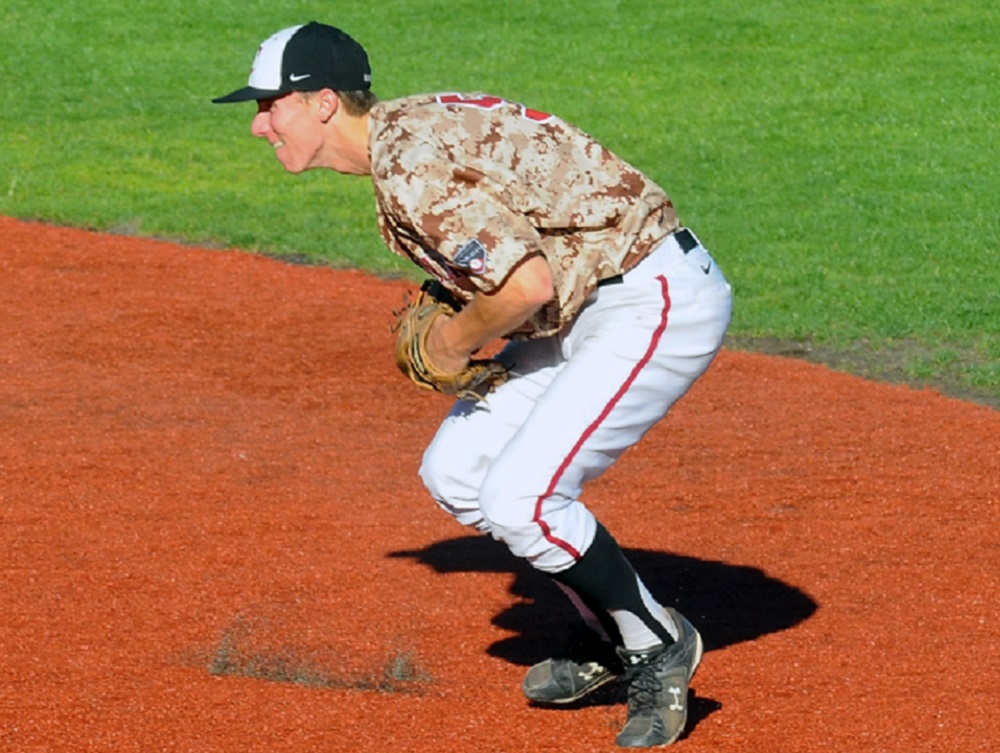 The Tampa Bay Rays have activated third baseman Matt Duffy (pictured above, 2010) from the injured list. He made his 2019 MLB debut on Tuesday and was 2-for-3 with a walk in a 5-4 loss to Boston. He had been on rehab assignment at Durham and with the Gulf Coast League Rays.

“I feel like it’s Opening Day,” Duffy told MLB.com. “When they called me to tell me to get on a flight and come back, I felt like I was getting called up to the big leagues again. I’m just really excited.”

Duffy will also see some time at shortstop and maybe first base depending on matchups. The original plan coming out of spring training was to try and get Duffy in the outfield, but that’s unlikely given the hamstring issues he suffered this season.

In case you missed it, the North Division defeated the South Division 14-1 on Tuesday at the WCL All-Star Game before a crowd of 2,284 at Vince Genna Stadium in Bend.

Seven Knights played for the South team. Lefty Tim Josten (Cal State Fullerton) pitched a scoreless inning of relief; he was the only Knights’ pitcher to appear.

Lee was named the game’s Top Prospect by the MLB scouts in attendance. The future Cal Poly Mustang was ranked as the No. 37 overall prospect going into the 2019 MLB Draft by MLB.com. He was drafted by San Francisco in the 35th round but did not sign.

We have added a position player and a pitcher for the West Coast League stretch drive. The newest Knights are redshirt sophomore catcher Tristan King of Texas Rio Grande Valley and freshman right-handed pitcher Marques Johnson of Riverside City College.

He played for the Walla Walla Sweets earlier this season and hit .273 in eight games, with three doubles and five RBIs.

Also, pitcher Alex Williams (Stanford) and Chase Watkins (Cal Poly) have left the team. Williams is being shut down for the balance of the summer; Watkins is attending a private pitching academy in the Seattle area.

We resume our WCL schedule at 7:05 p.m. Wednesday against the Portland Pickles at Walker Stadium in Portland. Game 2 of the series is at Goss Stadium at 6:30 p.m. on Thursday; the finale is set for 7:05 p.m. Friday in Portland.

We then head to Bend for a Saturday-Monday series with the Elks. Our next home series, also against Bend, starts on Tuesday, July 30.

Our attendance through 25 home dates is 39,340, an average 1,574 per opening. We are 2,309 fans ahead of last year’s pace through a corresponding number of openings.

This happened while the Blog was on break, but good news always bears repeating. Knights’ outfielder/catcher Briley Knight was the West Coast League’s Moss Adams Player of the Week for July 8-14, as announced by league commissioner Rob Neyer.

Our first home playoff game will be Wednesday, Aug. 14. We will host Game 3 on Aug. 15, if necessary. Playoff tickets are available by clicking here.

The Championship Series starts on Aug. 17 and resumes on 19, following a travel day. A Game 3, if needed, will be Aug. 20. The team with the best regular-season record will earn home-field advantage.

Birmingham (AA Southern, White Sox) second baseman Nick Madrigal (2015) was 2-for-4 with a run and two steals, raising his average to .370 in a 1-0 victory over Chattanooga on Tuesday night to earn Corvallis Knights Minor League Player of the Day honors. He played at Oregon State.

Our 2019 regular season is two-thirds completed but there are still seven more home games! Our next home game is Thursday against the Portland Pickles.

That’s all for today. See you again next Wednesday!