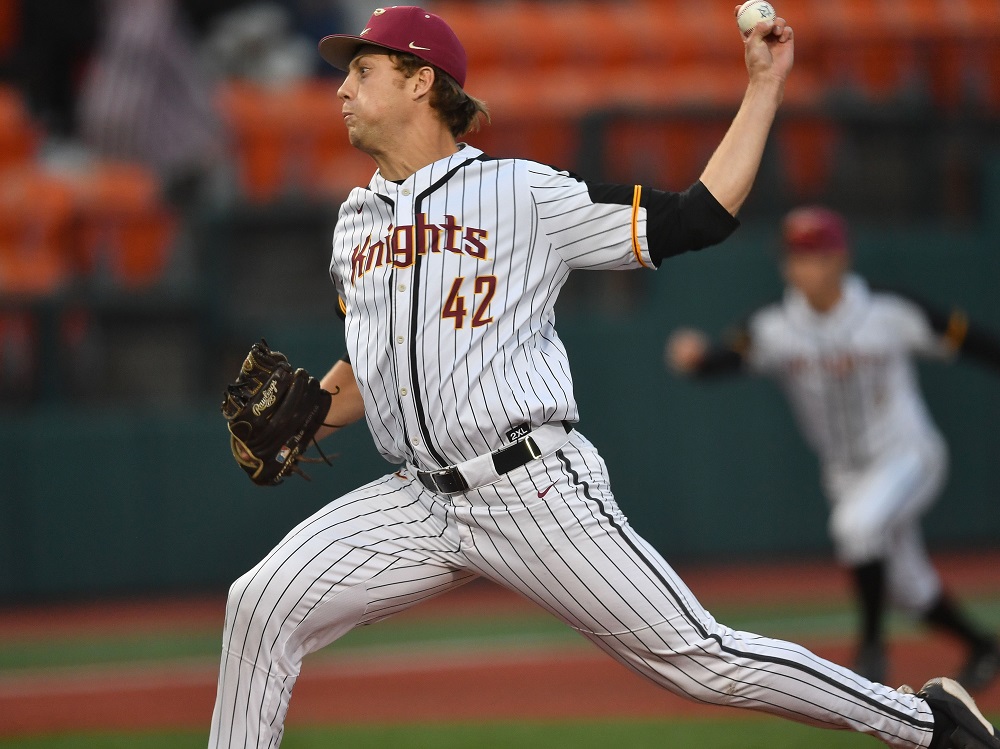 Sunday, July 31, Walla Walla, Wash. – Corvallis reliever Brady Maylett’s (pictured, above) stellar relief job in the ninth inning gave the Knights a 1-0 victory over Walla Walla on  in the finale of their West Coast League series at Borleske Stadium.

Corvallis reliever Nathan DeSchryver (Gonzaga) took a 1-0 lead into the last of the ninth but he walked the bases full with no outs. He was replaced by Maylett, a sophomore lefty from the University of Utah who inherited a seemingly hopeless situation.

However, he induced a grounder to shortstop Temo Becera (Stanford), who threw home for a forceout. The Walla Walla runner on second base did not run on the play, and catcher Tanner Smith alertly threw to third baseman Mason le (CSU Northridge) for a force play at third for the second out, completing the unusual double play.

Maylett walked a batter to reload the bases, but ended the game by striking out Nick Seamonds on a 2-2 pitch for his second save of the summer.

Corvallis scored 27 runs and had 32 hits in winning the first two games of the series 16-3 and 11-1. They were held to just three on Sunday, however, and neither figured in scoring their lone run.

In the seventh inning, Becera reached first when he was hit by a pitch. He alertly moved to third when Walla Walla left the base uncovered on a sacrifice bunt.

He then scampered home on Logan Johnstone’s (Gonzaga) sacrifice fly to center field.

The Knights host the NW Star Nighthawks in a nonleague game at 6:35 p.m. Monday. They then open a three-game home series with end, starting at 6:35 p.m. Tuesday.