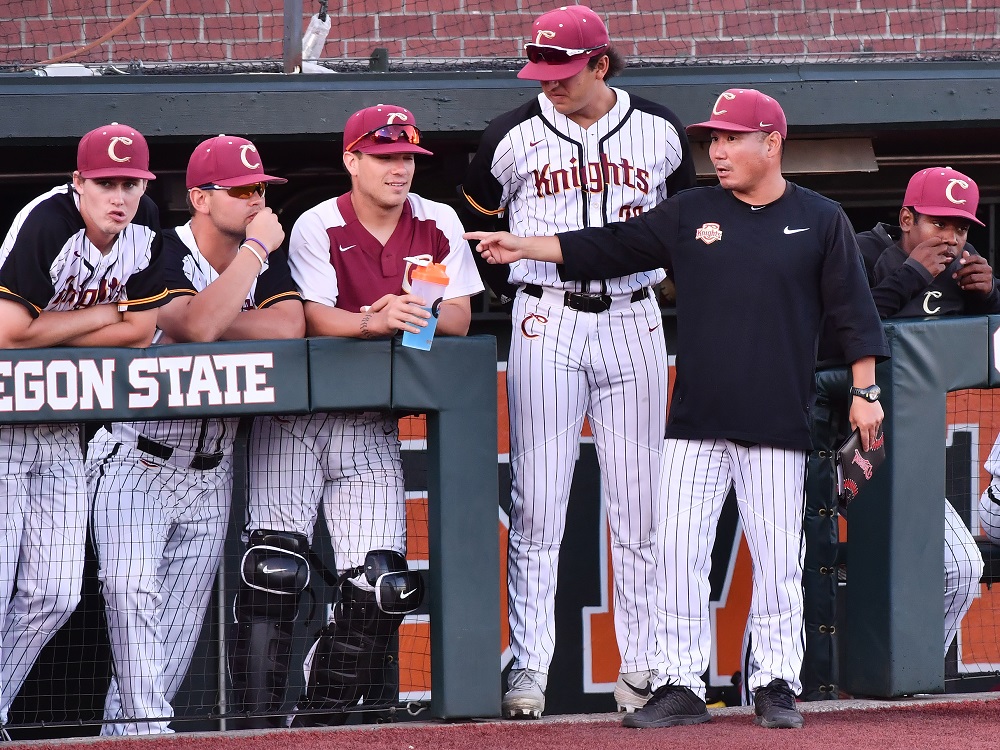 The Corvallis Knights have assembled a top-flight coaching staff to lead their quest for a fifth consecutive West Coast League championship.

“We are thrilled to add Jacob to our coaching staff for the 2020 campaign,” Knight said. “These shoes will not be easy to fill after a very talented Kellen Camus and Connor Lambert,” the pitching coach from 2011 until midway through the 2017 season, when he became the pitching coach at Portland.

“The recommendations leave no doubt that Jacob will be outstanding.”

He joins a staff steeped with continuity and accomplishment.

Knight, who began his Corvallis Knights managing career in 2008 and who is currently coaching for the Perth Heat in the Australian Baseball League, earned his sixth WCL Coach of the Year award in 2020. The Corvallis native directed the Knights to their seventh championship last summer (2008, 2011, 2013, 2016, 2017, 2018, 2019). He is the winningest coach in WCL history, has never posted a losing record and has never missed advancing to the WCL postseason.

He also won five division championships and earned WCL Coach of the Year honors four times at Wenatchee before retiring after the 2014 season. He coached 771 total games and was 300-172 (.636) in WCL regular-season contests. Wenatchee also won the 2003 Pacific International League title; that circuit was the precursor to the current WCL, which was formed in 2005.

A veteran of 10 seasons with the Lotti Lions in South Korea’s equivalent of Major League Baseball, Yoon has worked in the United States since 2009, mentored by former RCC head coach Dennis Rogers, a longtime supporter of the Knights. Yoon currently assists at RCC, a junior college program in Southern California that has sent such standouts as Chris Stewart, Tommy Hanson, Richie Jimenez, Marques Johnson and many others to Corvallis over the years.

A former pitcher in the Los Angeles Angels’ minor-league organization, Kopra has served as Corban University’s pitching coach for the past three seasons. This will be his first position in the West Coast League. He has previously coached in the Oregon Collegiate Baseball League.

“Jacob’s former teammates believe he is unique in his presentation and delivery and we can’t wait to see what he can offer our troops,” Knight said. “It is going to be another memorable summer with him on board.”

Kopra is a Gresham native and starred at Barlow High School before enrolling at Corban, where he was a teammate of former Knights’ standout Marc Gallegos. A four-year letterman, Kopra earned NAIA second-team All-American and Cascade Conference Pitcher of the Year honors as a senior in 2014.

He then signed with the Angels as a free agent and pitched in the Arizona Rookie League, the Pioneer League, the Midwest League and the California League in 2014 and 2015 before being released in March, 2016.