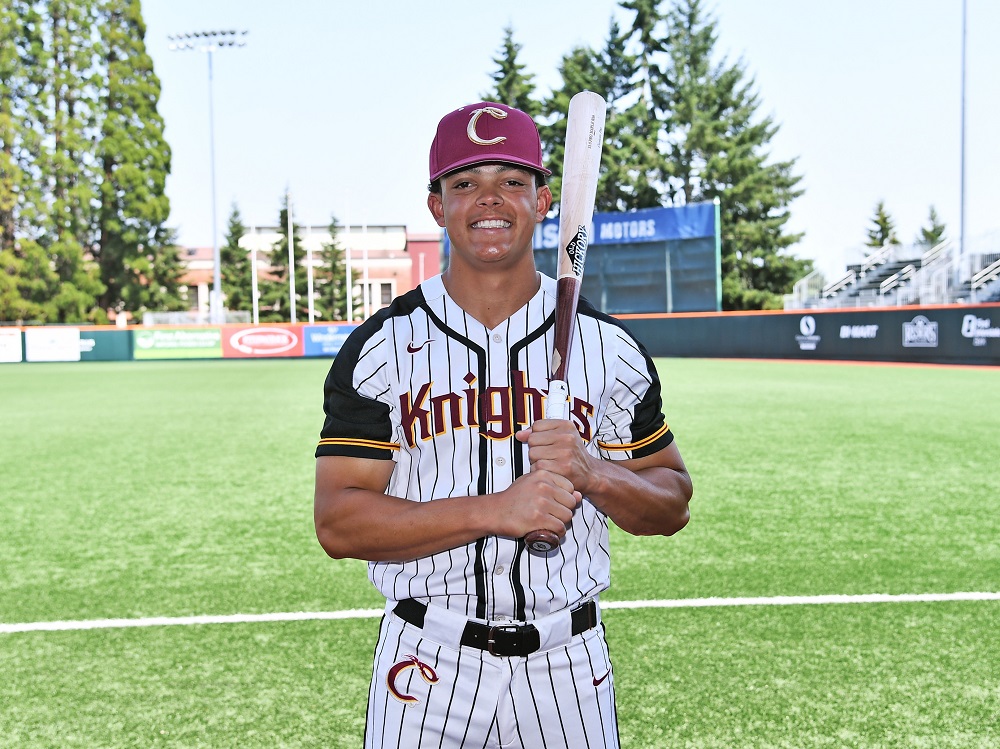 Saturday, July 17, Corvallis, Ore. – The Pickles evened their West Coast League series with Corvallis by topping the Knights 13-5 before an Alyrica Tip Your Cap Night crowd of 1,688, the second-largest gathering of the season.

The Pickles led 4-0, fell behind 5-4, then took the lead for good by scoring five times in the seventh inning off three Knights’ relievers. The loss snapped a four-game WCL winning streak for the Knights (24-8 WCL, 6-2 second half, 29-10 overall), who clinched a playoff berth by winning the South Division first-half championship.

A two-run homer to right field by Cal Poly’s Taison Corio (pictured, above) capped the five-run, sixth-inning comeback that gave the Knights a brief 5-4 advantage. It was his second homer in his last four WCL games.

“It was a little funky, it actually changed,” said the switch-hitting Corio, when asked to describe his approach on that at-bat. “I stepped into the box right-handed and they switched the pitcher in the middle of the at-bat, I had to flip lefty.

“We had a pretty big inning going, there were two outs. I wasn’t trying to do to much, just get the next batter up, pass the baton. I got a good pitch to hit and didn’t miss it.”

Travis Bazzana (Oregon State) had an RBI single and Kiko Romero (Central Arizona JC) and Tanner Smith (OSU) added sacrifice flies prior to Corio’s homer. The Knights had only one hit, and had fanned 10 times, in the five innings before mounting their rally. Nate Nankil (UC Santa Barbara) doubled and singled.

The Knights have a rare four-day break following Sunday’s game. They return to action on Friday, hosting the Medford Rogues in the opener of a two-game nonleague series at Goss Stadium.