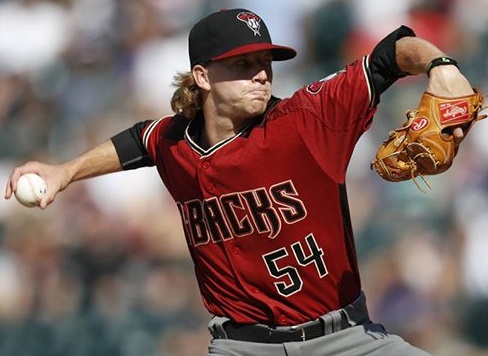 We have two more alums back in the major leagues. The Arizona Diamondbacks recalled pitcher Jimmie Sherfy (2011) from Reno of the triple-A Pacific Coast League for the second time this season on Sept. 2 and he got a save in his first appearance in round two, against Colorado on Sunday.

Please click here for a story and video of Jimmie’s top performance.

An Oregon alum, Jimmie is 1-0, 0.00 in three appearances, with a save and six strikeouts. He has retired all 12 hitters he’s faced in order in what so far is an impressive MLB debut.

Also, the Chicago White Sox just tweeted they have recalled left-handed pitcher Jace Fry (2013) from double-A Birmingham. He was 2-1, 2.78 in 33 games, with three saves and 52 strikeouts in 45.1 innings. Congrats to Jace!

Kansas City claimed pitcher Sam Gaviglio (2009) from Seattle on Sept. 1 after the Mariners put him on waivers. He has not yet pitched for the Royals, but the former Oregon Stater is on the big-league roster.

Catcher Andrew Susac (2009) is back with the Milwaukee Brewers following a brief injury rehab stint with Wisconsin in the Class A Midwest League. The ex-OSU standout was 3-for-7 (.429) in two games, with a homer and two RBIs.

Alum Christian Donahue (2015) has signed with the Chicago Cubs organization as an undrafted free agent. He played at Oregon State. Christian hit .291 (46-158) in 47 games for us, with three homers, 22 RBIs and 26 stolen bases.

Time to update the final regular-season stats of our minor-league Knights. We’ll do the position players today and the pitchers on Friday.

—————
Helena (R Pioneer, Brewers) first baseman K.J. Harrison (2015) was 2-for-5 with two doubles, three runs and an RBI in a 20-13 win over Missoula on Monday night to earn the final Corvallis Knights Minor League Player of the Day award. He played at Oregon State. This daily feature will now conclude, with the end of the regular season.