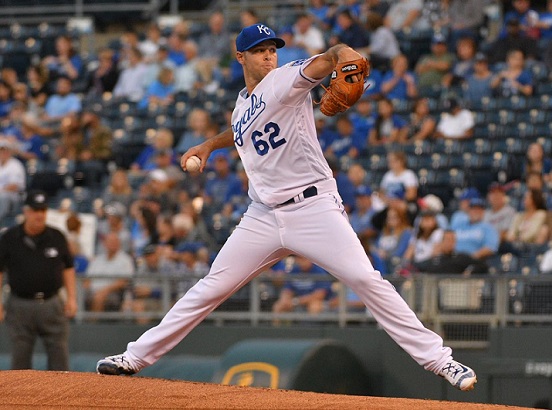 Alum Sam Gaviglio (2009) had an outstanding debut with the Kansas City Royals on Thursday night and was in position to get the win before the bullpen imploded in the ninth inning and cost him the decision.

Claimed on waivers from Seattle earlier this month, Gaviglio (pictured, above) allowed one run and four hits and had three strikeouts over five innings and left with a 2-1 lead. However, Minnesota scored three times in the top of the ninth and won 4-2 so he got a no-decision.

Please click here for more on Sam from the Kansas City Star newspaper. He played at Oregon State.

The Angels have reactivated pitcher Bud Norris (2005) from the disabled list. The former Cal Poly star had been sidelined since Aug. 29 with right-knee inflammation.

Time to update the final regular-season stats of our minor-league Knights. We’ll do the pitchers today; we did the position players on Tuesday.

CAMERON BISHOP (A, Orioles): The lefty from UC Irvine (2015-16) was 1-1, 0.78 with 35 strikeouts in 34.2 innings in eight games with Aberdeen of the Class A New York-Penn League and the rookie-level Gulf Coast League Orioles.

CASEY BLOOMQUIST (AA, Cubs): The righty from Cal Poly (2013) was 5-5, 5.80 in 29 games with Tennessee of the Class AA Southern League and Myrtle Beach in the Class A Carolina League. He two saves and 62 strikeouts in 85.1 innings.

TREVOR FRANK (A Lake Elsinore, Padres): The righty from UC Riverside (2012) was 4-5, 4.53 in 45 total games at El Paso of the triple-A Pacific Coast League and Lake Elsinore of the Class A California League. He had seven saves and 68 strikeouts in 57.2 innings.

GREG MAHLE (AA Mobile, Angels): The lefty from UC Santa Barbara (2012) was a combined 10-4, 4.77 in 50 games with Salt Lake in the triple-A Pacific Coast League and with Mobile in the AA Southern League. He had four saves and 52 strikeouts in 71.2 innings.

STEPHEN NOGOSEK (A St. Lucie, Mets): The righty from Oregon (2013) was 5-5, 3.52 in 45 combined games with Greenville of the Class A South Atlantic League, Salem in the Class A Carolina League and St. Lucie in the Class A Florida State League. He had 19 saves and 78 strikeouts in 69 innings.

AUSTIN SODDERS (A Lakeland, Tigers): The lefty from Riverside CC (2014) was a combined 11-5, 1.81 in 23 games with West Michigan of the Class A Midwest League and Lakeland of the Class A Florida State League. He had 122 strikeouts in 139 innings.

The West Coast League’s list of 2017 pros features 31 players who have appeared or who are active in the major leagues this summer. A total of 270 WCL alums have played or are active in affiliated professional baseball in 2017. For more on that story and a complete list of WCL pros, please click here.

That’s all for today. Have a great weekend and we will see you on Tuesday.