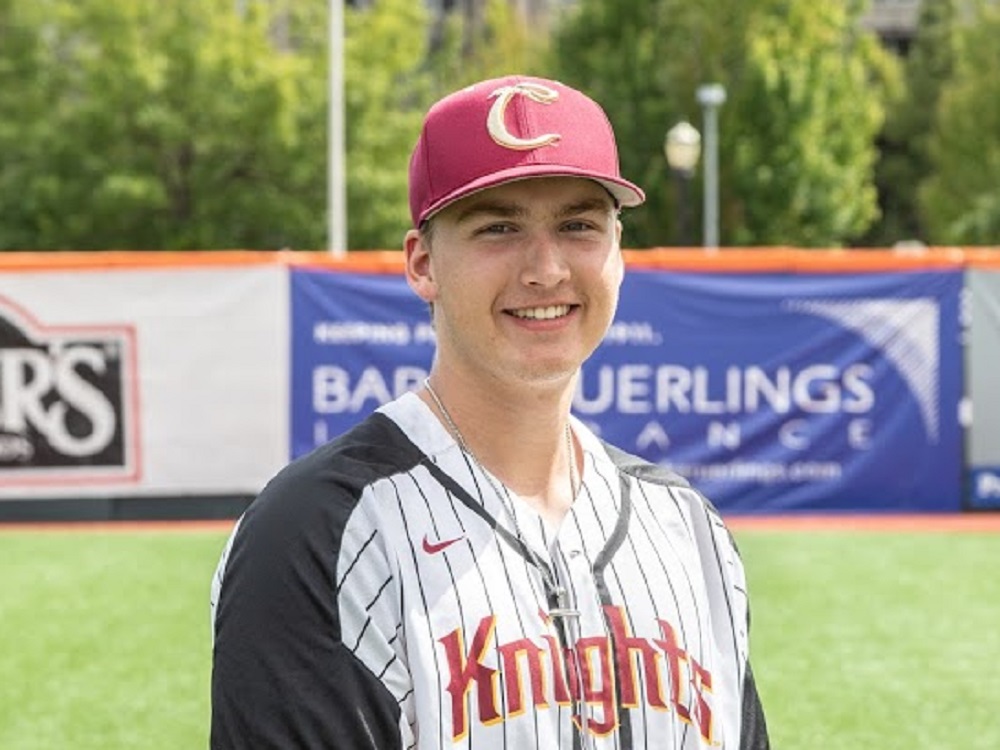 More good news to report about our 2020 team.

Pitcher Jacob Dobmeier (pictured, above) will return to the Knights for the 2020 season. He a 6-4, 220-pounder from Toledo, Ore., who played at Newport High School. He is a freshman at UC San Diego.

Jacob was 2-1, 4.95 in nine appearances for the Knights in 2019, with a save and 13 strikeouts in 16.1 innings. His longest outing was a three-inning stint at Port Angeles, when he allowed no earned runs and two hits, with four strikeouts, while earning the pitching decision.

He had a 1.87 ERA in 12 pitching appearances for Newport in 2018, with 94 strikeouts in 63.2 innings. He had a 17-strikeout game vs. Stayton and 12-strikeout games against Junction City and Scappoose.

Cal State Fullerton freshman Miguel Ortiz has signed with the Knights for the 2020 season.

He is a 6-foot-1, 195-pound outfielder from Clovis, Calif., who bats and throws right. He was a standout at Buchanan High School.

A three-year starter at Buchanan, Ortiz hit .304 as a senior, with two homers and 11 RBIs. He played for the Utah Marshalls club team last summer.

Ortiz is the son of former major league infielder Jose Ortiz, who played with Oakland, Colorado and in Japan and Mexico during a 19-year professional career. His older brother J.D. plays at UC Santa Barbara; another older brother, Alex, plays at Reedley (jr.) College in California.

Welcome to the team, Miguel!

Alum Nick Madrigal (2015), who played second base for much of the 2019 season with the Birmingham Barons in double-A Southern League. was named a Rawlings Gold Glove Award recipient by Minor League Baseball and Rawlings Sporting Goods Company, Inc.

Madrigal, a former first-round selection out of Oregon State, opened the season with Class-A Advanced Winston-Salem before making the jump to Birmingham in early June. While with the Barons, Madrigal committed zero errors in 333.1 innings of play. In addition, Madrigal also hit .341 with 56 hits, 11 doubles, and 16 RBI’s in 30 games. In August, Madrigal was promoted to the Triple-A Charlotte Knights where he ended his 2019 campaign.

A total of 315 West Coast League alums appeared in affiliated baseball this past season. For a complete list of WCL professionals, please click here.

Happy Wednesday, everyone, from the world-wide headquarters (WWHQ) of the Corvallis Knights, your 2016-2017 West…