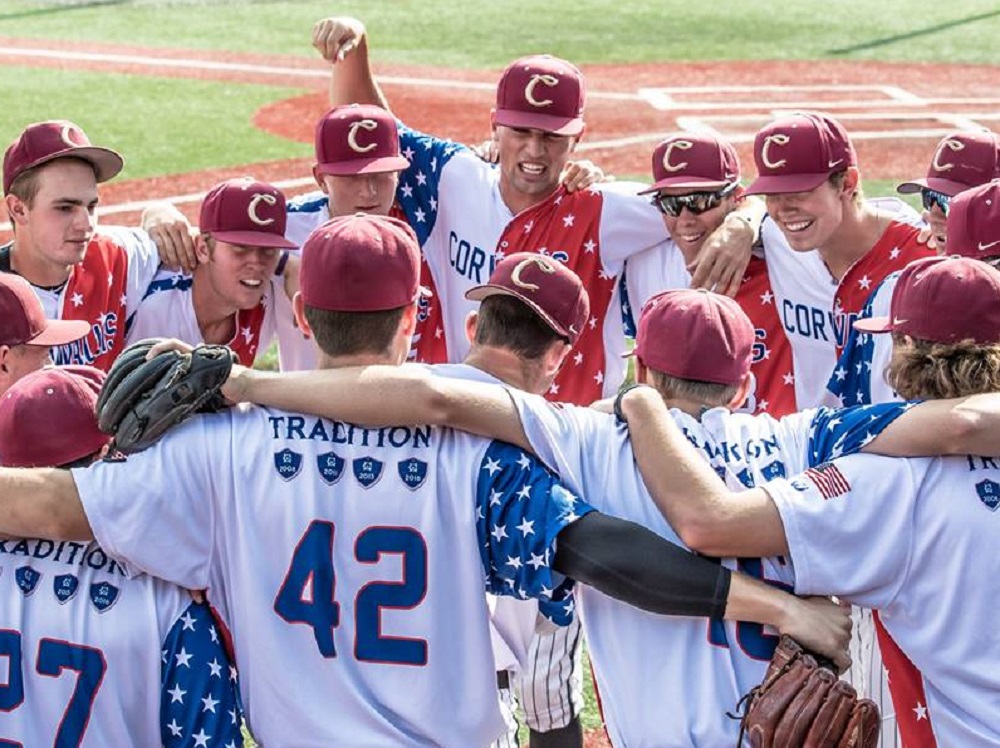 Happy Friday, everyone, from the world-wide headquarters (WWHQ) of the Corvallis Knights, your 2017 South Division playoff and 2016 West Coast League champions!

Reliever Kolby Somers was our unlikely hero in the Knights 3-2 victory over Yakima Valley last night in the decisive Game 3 of the WCL South Division playoff series hosted at Goss Stadium.

An incoming Oregon freshman from Century High School in Hillsboro, the lefty retired all six Pippins he faced in the eighth and ninth innings to post his first save of the summer. He struck out two and needed only 16 pitches in a lights-out performance that eliminated the Pippins and capped a tremendous home-field comeback by the defending WCL champions.

Corvallis (42-21) now advances to face Victoria in the best-of-3 WCL Championship Series, which starts at 6:35 p.m. Saturday at Royal Athletic Park in Victoria. The HarbourCats swept Kelowna 11-5 and 8-2 to sweep their North Division playoff series and earn their first berth in the finals.

We will host Game 2 on Monday, August 14 and Game 3 (if necessary) on Tuesday, August 15. Both games will start at 6:40 p.m. It will be our ninth championship appearance in 11 seasons in Corvallis; we are 4-4 all-time in the finals.

Tickets for Monday night’s game are now available by clicking here. See you at the ballpark on Monday night!

Victoria won the North Division’s second-half championship and finished 29-25 the WCL. The HarbourCats led the West Coast League in attendance (51,264), averaging 1,899 per game. Corvallis was second at 39,592 (league games only), an average of 1,466 per opening.

Victoria is managed by former major leaguer Brian McRae, the son of ex-MLB player/manager Hal McRae. We split the regular-season series with Victoria, as each team took 2 of 3 on the road.

Each series was different. We clobbered Victoria 12-4 and 14-4 in the final two games at Royal Athletic Park; Victoria handed us back-to-back shutout losses in the last two games at Goss Stadium.

The Cats playoff roster has been led by future San Diego catcher Shane McGuire, Mississippi State first baseman Harrison Bragg and former Arizona State outfielder Andrew Shaps. McGuire hit .451 in the regular season over 82 at bats with 4 homers and 26 RBIs; Shaps hit .441 with 2 HR and 21 RBI. Bragg blasted 7 homers in the regular season and finished with 27 RBIs while hitting .277.

Another HarbourCat that can really hit is Taiwan product Po-Hao Huang. He homered in Victoria’s 11-5 North Divisional Series clinching win at Kelowna and hit .280 for the season.

Saturday night’s game at Royal Athletic Park will be broadcast on KEJO 1240 AM; please click here for a link to Mike Parker’s call.

The Victoria HarbourCats partner with Go LIVE Broadcasts to provide live pay-per-view broadcasts of all of the team’s home games. Go LIVE offers a television caliber, three-camera video production and audio play-by-play.  For the past two seasons, Shaw TV has presented the HarbourCats Game of the Week on cable television across south Vancouver Island, using Go LIVE’s production.

The cost to view Saturday’s game on at RAP is $8.99. For more info, visit Go LIVE Broadcasts: http://www.golivebroadcasts.com/live.html

Our bullpen was outstanding throughout the Yakima series. It gave up just one earned run in 10.2 combined innings, a 0.88 ERA, even though closer Chase Kaplan (Kansas), Louis Crow (San Diego) and Cason Cunningham (Linfield) were all unavailable.

Jacob Fricke (Western Oregon) and Trevor Wells (Linn-Benton CC) allowed one unearned run in the final 4.2 innings of a 9-3 loss at Yakima on Tuesday. Hazahel Quijada threw two scoreless innings and got the save in an 8-4 win on Wednesday night, and Miles Glazier and Somers allowed one in four innings on Thursday.

Thursday night’s Game 3 of the South Division playoffs drew 753 fans, raising our season total to 50,379 through 34 openings, a decrease of 2,312 fans from last year’s attendance through a corresponding number of home dates. That’s an average of 1,482 fans per game.

We will have at least one more home game, on Monday night. We probably can’t break our franchise record of 53,803 fans, set last summer in 35 home dates, but 2017 will be our No. 2 all-time year, attendance-wise.

Time to update the stats of our alums in minor league baseball. We did the position players on Friday; today we do the pitchers.

Greeneville (R Appalachian, Astros) first baseman Roman Garcia (2016) was 2-for-3 with a homer, an RBI and two runs in a 5-2 win over Elizabethton on Thursday night to earn Corvallis Knights Minor League Player of the Day honors. He played at San Diego.

That’s all for today. Have a great weekend and we will see you back here, and at the ballpark, on Monday.

Happy Tuesday/Wednesday, everyone, from the world-wide headquarters (WWHQ) of the Corvallis Knights, your 2016-2017 and…

Happy Tuesday, everyone, from the world-wide headquarters (WWHQ) of the Corvallis Knights, your 2016 West…