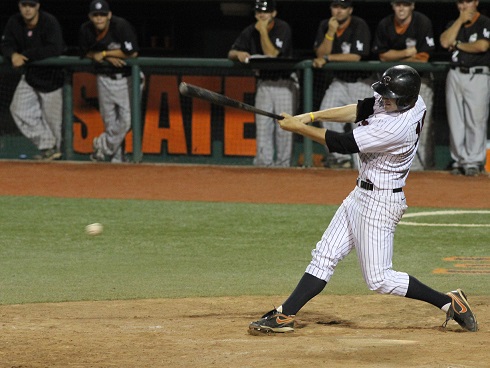 Alum Dylan Jones (2009-10), our 2010 Most Valuable Player, has been hired as UC Santa Barbara’s Baseball Director of Baseball Operations, it was announced by head coach Andrew Checketts.

“I’m very excited for the opportunity to join the Gaucho family,” said Jones, pictured above while playing for the Knights in 2019. “Coach Checketts and his staff are first-class coaches who are dedicated to developing student-athletes on and off the field.

“I am truly thankful to be a Gaucho and look forward to working alongside such great coaches and student-athletes.”

Please click here for more on that story. Congrats to Dylan, who had been working as an assistant coach at Linn-Benton CC and as pitching coach for the Bend Elks.

Alum Matt Nylen (2011-12) of Mt. Hood CC and Western Oregon is now working as a medic in the United States Air Force. He is stationed in Tacoma.

Pretty slow news day; things should start to pick up shortly as we begin to announce our signings for the 2018 season. In the meantime, have a great weekend, and we will see you on Tuesday.