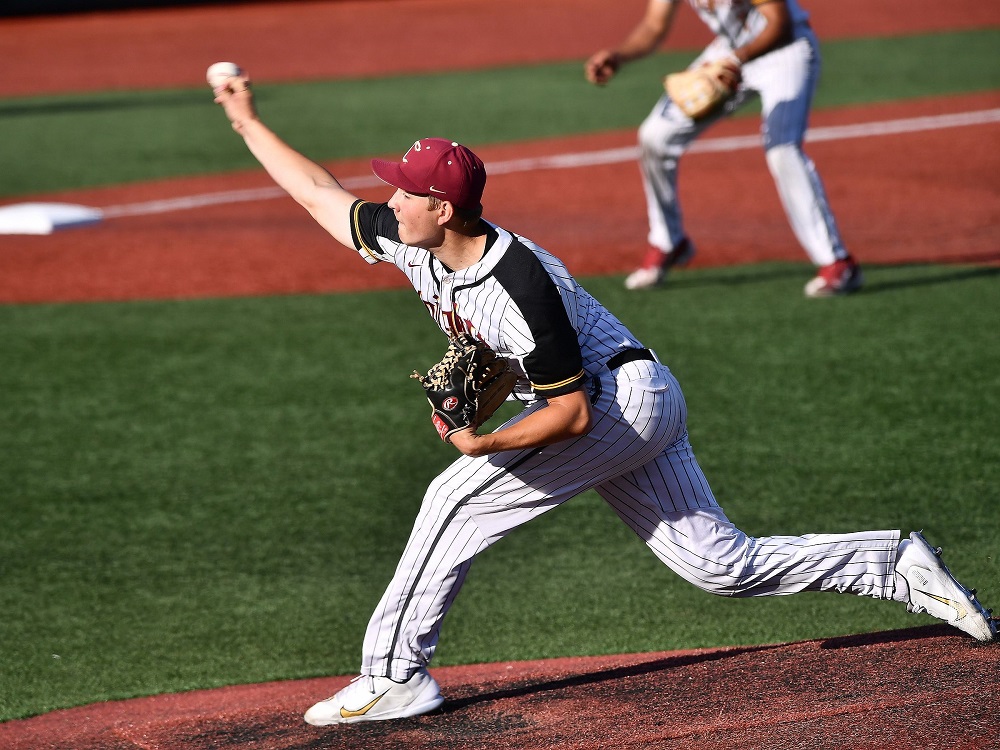 The Elks scored three times in the final two innings to salvage the series finale. Two pitchers stymied Corvallis on five hits, none after the fifth inning.

The loss prevented the Knights from establishing new records for overall and league winning streaks. They tied the overall record of 18 straight, and the league record of 16 straight, set in 2019.

Corvallis starter Joey Gartrell (Portland, pictured above) allowed an infield single and faced just one batter over the minimum in four efficient innings. He struck out three, did not issue a walk, got seven fly-ball outs, and was not involved in the decision.

Gartrell has not allowed more than one earned run in any of his six starts. He has an 0.64 ERA in his last seven appearances, giving up just two earned runs in 28 innings.

The Knights had runners on first and second with no outs in the second and fifth innings, but could not break through. They left seven runners on base overall. Ryan Stafford (Cal Poly) was the only Knight with more than one hit, as he singled twice.

Corvallis concludes the regular season with a split series against Ridgefield. The teams play in Washington on Friday and Sunday and at Goss Stadium at 7:15 pm.  Saturday in a Fireworks Night matchup.

The Knights clinched their 15th consecutive postseason berth on July 7 by winning the South Division’s first-half championship by two games over Ridgefield. As a reward for having the WCL’s best overall record, Corvallis will host the one-game South Division Championship on Aug. 13 and the WCL Championship Game on Aug. 15 if it advances that far.

It will also have home-field advantage in the best-of-3 opening round of the South Division playoffs, which start on the road on Aug. 9. Corvallis will open the home portion of the postseason with Game 2 on Aug. 10. If necessary, Game 3 will be at Goss Stadium on Aug. 11.