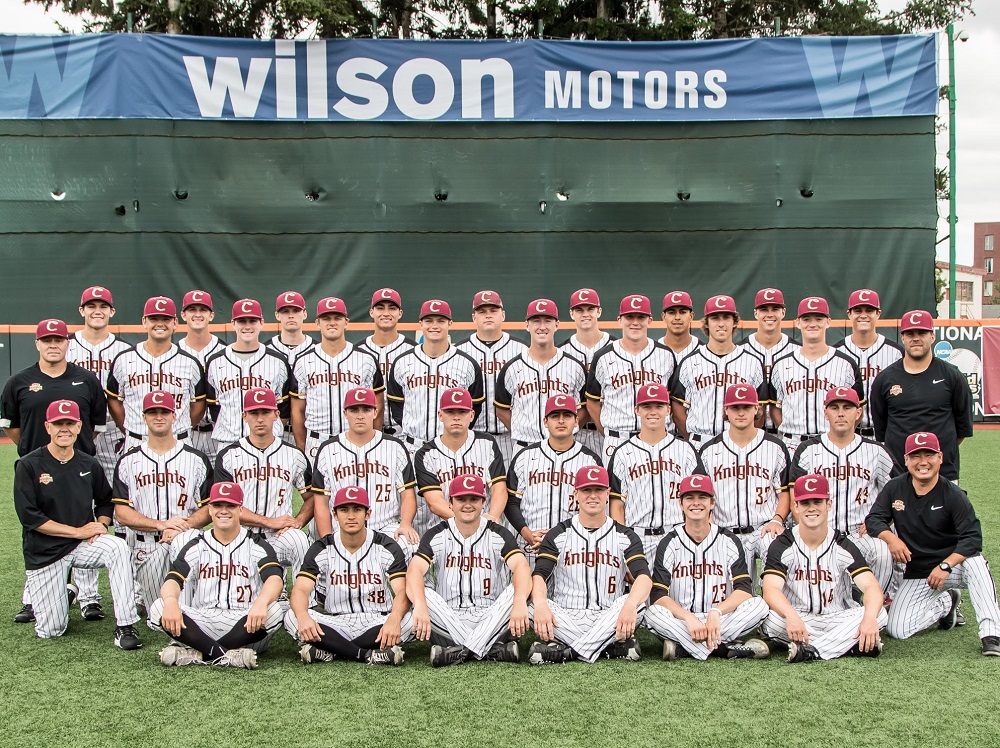 The Corvallis Knights and Portland Pickles launched a rivalry series this summer called the Farm to Field Series that ended in a 3-3 tie; as each team won its road series with the Pickles topping the Knights two games to one at Goss Stadium (outscoring the Knights 34-16) and Corvallis edging Portland two games to one at Walker Stadium earning hard-fought wins in the final two games of that series, 6-3 and 6-5.

Both teams finished strong to post the top two records in the West Coast League with Portland securing the league’s top mark at 37-17 with Corvallis one game behind at 36-16.

The Pickles won the WCL South first-half title while the Knights captured the second half.

Although the Farm to Field Series finished in a dead heat, there will be a definitive victor in the WCL South Divisional Series.

Game one is tonight at OSU’s Goss Stadium, with the first pitch set at 6:30 pm. Games two and three will be hosted by the Pickles at Walker Stadium in SE Portland’s Lents Park on Saturday, August 11 and Sunday, August 12 (if necessary). Saturday’s contest is set for a 7:05 pm start time.

The winner will advance to play in the West Coast League Championship Series either versus Bellingham (35-19) or Kelowna (28-26). The Knights went 1-2 vs. the Bells and swept the Falcons, going 6-0.

The Knights are led offensively by a trio of right-handed hitting, senior-to-be sluggers. Center fielder Chandler Anderson of Utah led the league in at bats (220), hits (70), total bases (101) and doubles (16). Anderson hit .318 with 40 runs scored, 5 homers and 28 RBIs and finished second in the league in stolen bases with 22.

Left fielder Cody Hawken of Portland led Corvallis in hitting with a .331 batting average and hit 10 doubles, blasted 3 homers and collected 30 RBIs while stealing 12 bases. And right fielder Austin Feist of St. Martin’s led the WCL in RBI with 41. He also led the Knights in homers with 7 and hit .305 with two triples and 11 doubles.

Up the middle, future Oregon State infielder Beau Philip and returnee Chad Stevens of Portland were arguably one of the top double play combos in the league. They also had outstanding offensive seasons with Stevens leading Corvallis in runs scored with 42 and triples with 6 while hitting .322. Chad also stole 15 bases. Philip hit .293 with 9 doubles, 3 home runs and 18 RBIs.

Future Portland Pilot Trace Tammarro anchors the infield as the frosh-to-be led all West Coast League first basemen in fielding percentage at .992. He also hit .267 with two homers and 26 RBIs.

Corvallis and Portland both finished hitting .286 as a team, second best in the WCL behind Kelowna at .287. Portland hit 43 homers while Corvallis blasted 27. The Knights led the league in doubles with 100 while the Pickles collected 93 doubles.

Portland owns the best home record in the WCL at 21-5 with Corvallis next best at 21-6.

The Pickles pitching staff led the league in strikeouts with 539 and posted the league’s second lowest ERA at 2.74 (Bellingham’s staff posted a league-low 2.48 ERA).

Portland’s team fielding percentage of .975 was tops in the league.

Pitching and defense wins championships and the Pickles definitely excelled at both this summer to earn the league’s top mark and its first WCL postseason berth in its first season in the league.

It should be a great series between two clubs playing very well down the stretch, with lots on the line – for back-to-back champion Corvallis a shot at a three-peat and for Portland a chance to win it all in their inaugural West Coast League season.