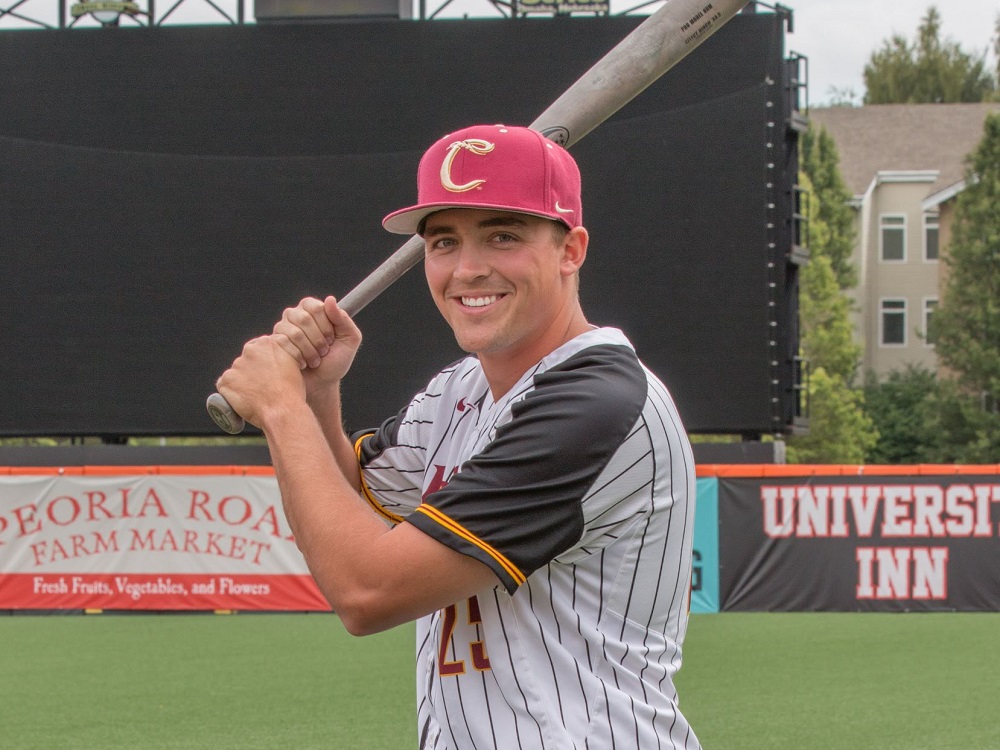 The Knights clinched home-field advantage for the West Coast League Championship Series – if they advance that far – by blanking Yakima Valley 2-0 for their 17th consecutive home victory.

Right fielder Austin Feist (pictured, above) broke a scoreless tie with a seventh-inning homer and five pitchers combined for the Knights’ first shutout since a 1-0 victory at Bend on June 22.

Corvallis and Portland have qualified for the postseason playoffs. The Knights will host Portland at 6:30 p.m. Friday in Game 1 of the best-of-3 South Division playoff series. Game 2 and Game 3 (if necessary) will be at Portland on Saturday and Sunday.

Corvallis has 36 WCL wins with one game remaining; Bellingham has 35 total victories to lead the North Division playoff qualifiers. Portland would also have the home-field advantage in the finals.

A senior-to-be at St. Martin’s, Feist crushed a 1-1 pitch well over the wall in left-center leading off the seventh to shatter the scoreless tie. He leads the Knights with seven homers and 39 RBIs in league action.

The Knights have not lost a home game since July 1. They have won six straight series since erasing a 5-0 deficit to top Portland 6-5 in Portland on July 23 in the rubber game of that key South Division series.

“I just credit it to the team chemistry,” Feist said. “We are all so close and everybody has confidence and trust in each other.”

DH Cole Hamilton (Linn-Benton CC) drove in an insurance run with a two-out single in the home eighth. He and Feist were the only Knights with two hits.

Crow put the tying run on base with two outs in the ninth but got the final out on a soft line drive. He has a team-high four saves, three of which have come in August.