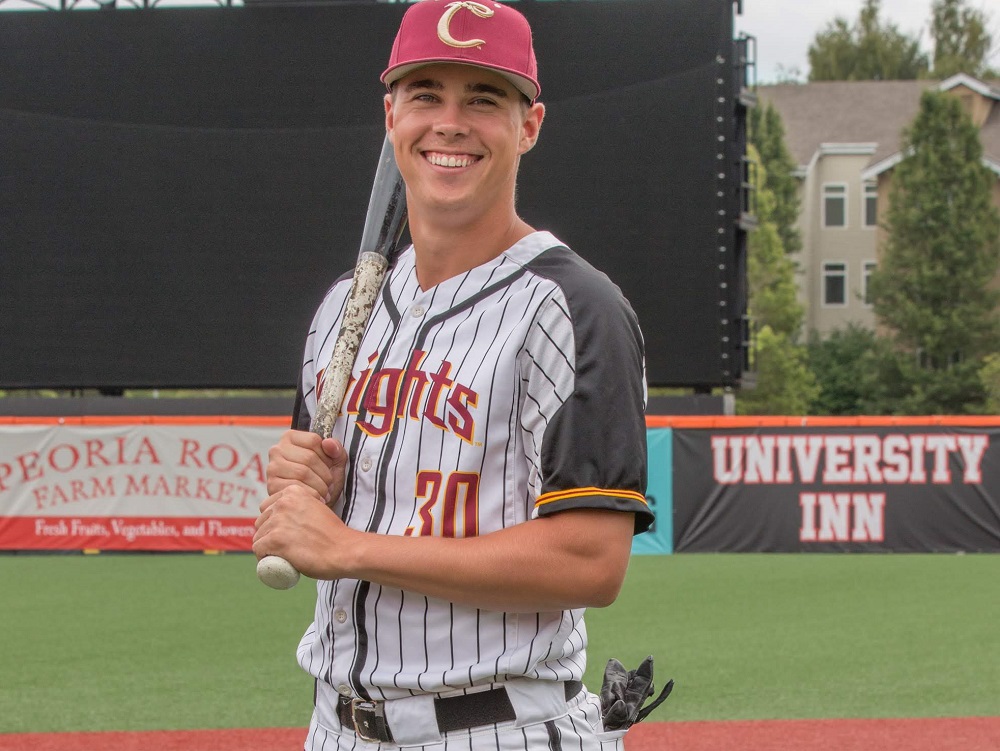 A senior-to-be at Portland, Hawken slammed a two-run single in the fourth inning to erase a 1-0 deficit. He added a single later in the game and now has 28 RBIs, tied for second on the team with Portland teammate Chad Stevens.

Corvallis protected that slim 2-1 advantage until the ninth, when it scored two insurance runs. Brendan Beck (Stanford) laced a two-out RBI single for a 3-1 advantage and a walk to Cole Hamilton (Linn-Benton CC) scored the final run after two hit batsmen loaded the bases.

The Knights (38-19-1, 34-17 WCL, 18-6 second half) took the series with their 12th win in their last 13 WCL games. They remained in second place in the South Division second-half pennant race, one-half game behind Portland.

Corvallis and Portland have qualified for the postseason playoffs. The Knights will host Portland at 6:30 p.m.  Friday in Game 1 of the best-of-3 South Division playoff series.

Starter Kolby Somers (Oregon) allowed three hits and one run in six innings, with seven strikeouts. He faced 21 hitters, just three over the six-inning minimum, and improved to 3-1 with the win.

Reliever Logan Petet (Utah Valley U. in 2018-19) struck out three in 1.1 innings and closer Louie Crow (Cal Poly-Pomona in 2018-19) got the final five outs for his third save. He has two saves and six strikeouts in 6.2 innings over his last four appearances.

Center fielder Chandler Anderson (Utah) doubled, singled twice and scored and Beck had two hits for the Knights. They finished with a 15-12 WCL road record.

The Knights begin their final regular-season series of the summer by hosting Yakima Valley at 6:30 p.m. Monday. The teams play again at 6:30 p.m. Tuesday and at 7:05 p.m. Wednesday.