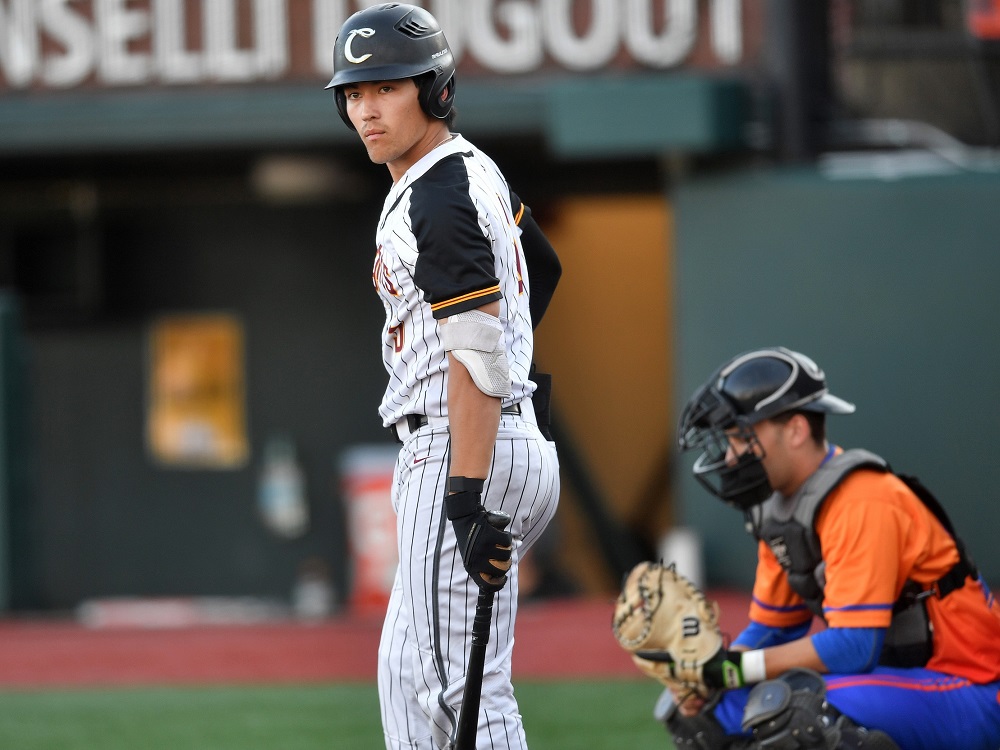 Wednesday, July 27, Springfield, Ore. – Corvallis extended its West Coast League win streak to 10 games with a 9-6 victory at Springfield to capture its series with the Drifters and improve its overall WCL record to 32-12 and second-half mark to 14-4.

Corvallis scored early and often and were led by third baseman Tyler Quinn of Pacific University (pictured) who went 3-for-5 with two doubles and 3 RBIs. Outfielder Logan Johnstone of Gonzaga went 4-for-5 with a double and designated hitter Briley Knight of Portland collected three hits and a RBI.

Nathan DeSchryver of Gonzaga delivered a quality start allowing only one run over 4 innings. Quinn’s spring teammate reliever Will Clark of Pacific picked up the win, tossing three scoreless innings before laboring in the bottom of eighth giving up three consecutive singles and a walk before being replaced by designated hitter Briley Knight. After balking in a run and walking a batter, Knight retired the next three batters to limit the damage and snuff the Springfield rally.

First baseman Kiko Romero, a future Arizona Wildcat, pitched the final frame to close things out for Corvallis allowing three runs in the ninth as the Drifters collected a walk, two singles and double off the position player.

The win was the Knights first victory at Springfield in team history.

Corvallis and the Drifters finish their series tomorrow at Goss Stadium. The expansion Springfield Drifters took the first series between the two clubs in late June. The Knights will go for the sweep of Springfield Thursday night and look for their 11th straight WCL win and 12th straight victory overall.

Tomorrow’s contest at Goss Stadium is a Block 15 Thursday. First pitch is 6:35 pm. The probable starting pitcher for the Knights is Cam Day of Utah.

Pointstreak is conducting site maintenance on their servers today. West Coast League box scores will not be available until Thursday.