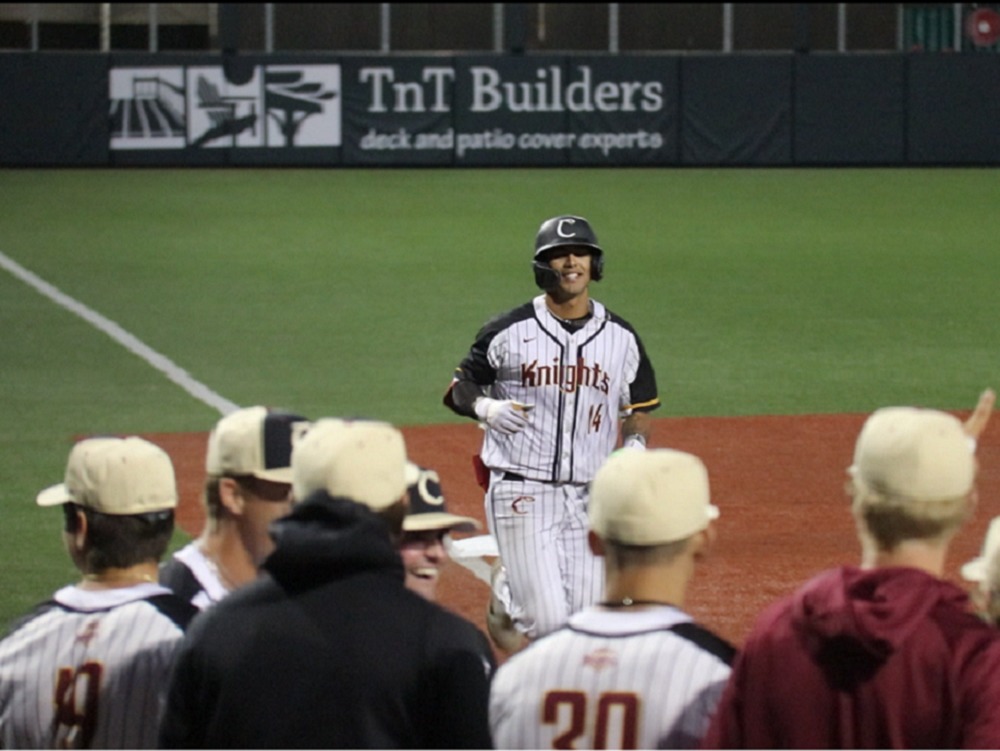 Romero’s (pictured, above) opposite-field blast over the taller portion of the left-field barrier came on a 3-1 pitch. It set off a wild celebration from the crowd of 1,912 and his teammates, who mobbed him as he approached home plate to complete his joyful journey around the bases, and then drenched him by dumping the contents of a water bucket on his head.

It was the team-leading fifth homer of the summer for Romero, an Arizona signee, and his first since June 30 at Springfield. It gave the Knights (27-13, all, 27-12 WCL, 9-4 second half) a series and season sweep of the Black Bears.

It was a come-from-behind win. After falling behind 6-5 when the Black Bears scored four times in the top of the eighth, Corvallis tied the game in the bottom half on Brady Lavoie’s (San Diego State) RBI single.

RBIs by Romero and Ryan Stafford (Cal Poly) put the Knights ahead 2-1 in the third. Zander Darby’s (UC Santa Barbara) RBI double made it 3-1 in the fourth.

Cowlitz drew with 3-2 with a solo homer in the sixth but the Knights regained some breathing room with two runs in the seventh. One run scored on an error, the other on a squeeze bunt by Mason Le (CSU-Northridge).

Reliever Ethan Ross (San Jose State) went the final 1.2 innings for the win. Cowlitz got the tying run on base with two outs, but a grounder to second base ended the game.

Knights starter Cam Day (Utah) allowed five hits and one unearned run in four innings. He opened the game with 11 consecutive strikes, threw 51 in 72 total pitches and had five strikeouts, the final three to escape unscathed from a bases-loaded, no-out jam in the fourth inning.

The homestand continues this Friday, Saturday and Sunday. Incoming Stanford freshman Matt Scott (1-0, 6.23) is the projected starter in the opener, opposed by Hawaii’s Alex Giroux (3-0, 3.00) for the Pickles.