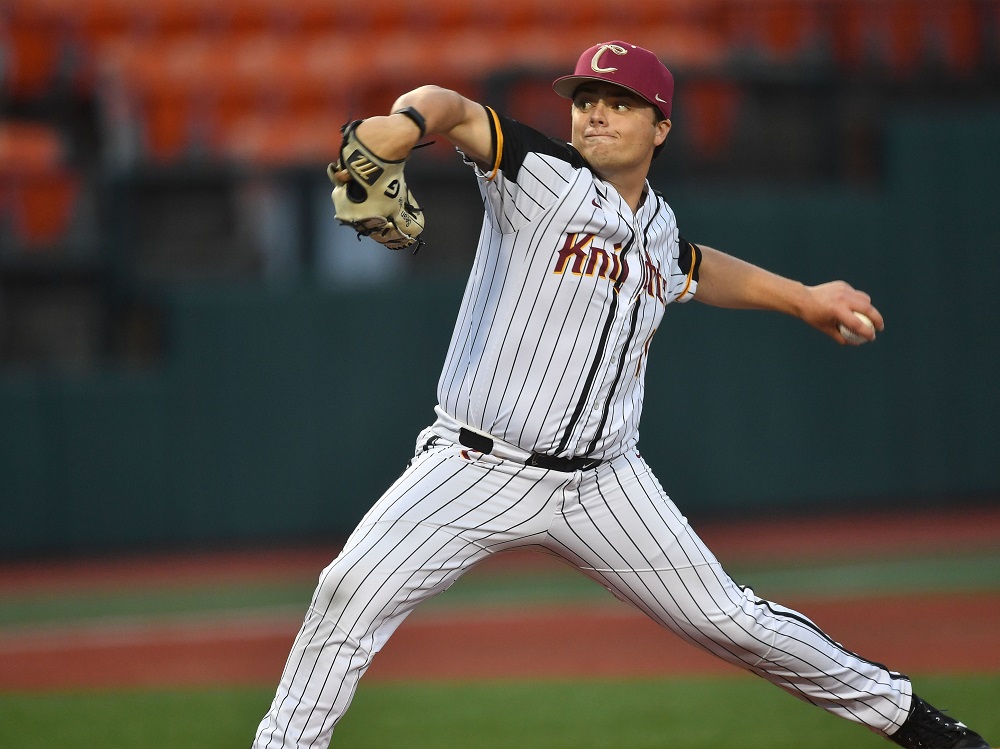 A bases-loaded walk to Jonah Advincula (Redlands) drove home the decisive run in the 10th inning as the Knights tipped Portland 2-1 in a matchup of the South Division’s top two teams before a Goss Stadium crowd of 2,101.

The Knights (28-13, all, 28-12 WCL, 10-4 second half) used outstanding pitching from starter Matt Scott (Stanford) and reliever Sean Wiese (Hawaii) to stretch their winning streak to six consecutive games. They combined to allow only three hits – just one in the final eight innings – and threw 101 strikes in 140 pitches.

Corvallis, which is 8-1 in its last nine games, also pulled ahead of the Pickles (26-12) in the South Division’s overall standings. Portland (11-3) still leads the Knights (10-4) by one game in the second-half pennant race.

Third baseman Temo Becerra (Stanford) started the 10th by grounding a double just inside the third-base bag. Spencer Scott (Portland) was safe at first on an error on his sacrifice bunt, and Brady Lavoie (San Diego State) was walked intentionally to load the bases.

With Advincula at bat, Portland brought in a fifth infielder and played its two remaining outfielders shallow. However, the strategy backfired when Advincula walked on five pitches.

He was mobbed by teammates between first and second base, much as teammate Kiko Romero was on Thursday night following his walkoff homer with two outs in the ninth that gave the Knights a 7-6 victory over Cowlitz.

Corvallis scored its first run in the second inning on Scott’s sacrifice fly. It advanced only one runner to second after that until the 10th.

Wiese (pictured above) pitched five stellar innings, facing just two hitters over the minimum. He retired eight batters on groundouts; he did not have a strikeout or a walk and threw 47 strikes in 63 pitches. He dropped his ERA from 1.44 to 1.20.

An incoming freshman at Stanford, Scott had his best and longest outing of the summer as the Knights starter, allowing one run and two hits in five innings. He struck out six, retired the final 10 Pickles he faced in order and lowered his ERA from 6.23 to 4.61.

Scott threw 54 strikes in 77 pitches. The first two Pickles pitchers also performed effectively, allowing no walks until the 10th, a big factor in the game being played in a brisk 2:23.