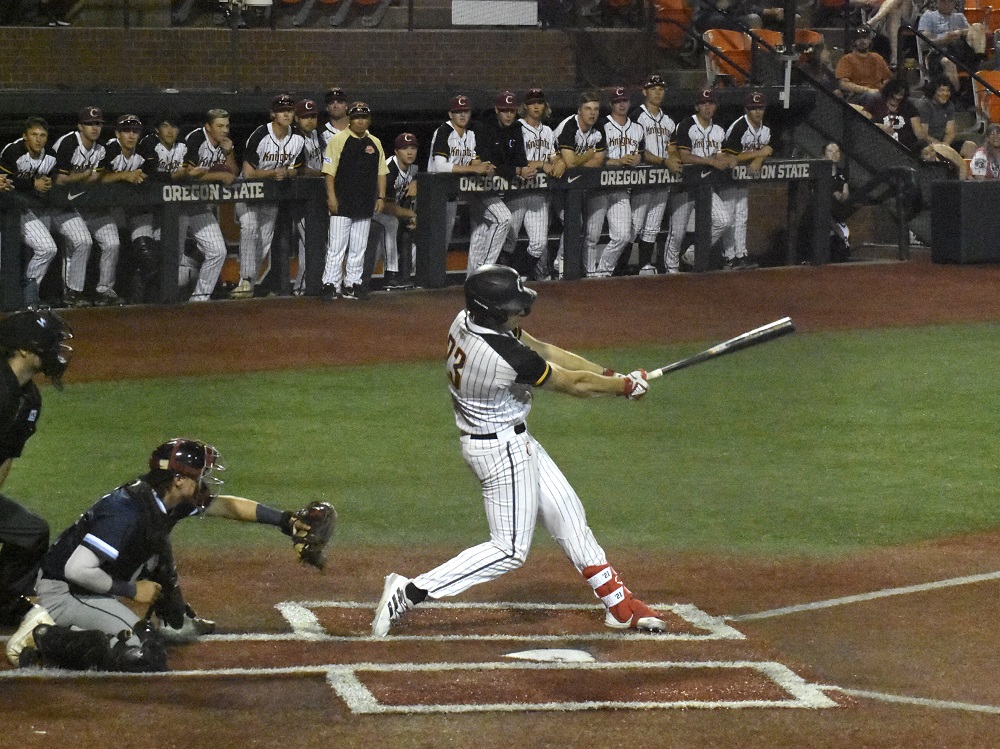 Saturday, July 23, Corvallis, Ore. – The Knights unleashed a barrage of extra-base hits in a series-clinching 9-1 victory over Portland before a jacked-up crowd of 2,411 on a balmy night at Goss Stadium.

Corvallis bashed three homers and three doubles among it 11 base hits and stretched its winning streak to seven games in a row. The Knights (29-13, all, 29-12 WCL, 11-4 second half) are 9-1 in their last 10 games, moving them into a first-place tie with the Pickles in the South Division second-half pennant race.

Brady Lavoie’s (San Diego State) bomb over the left-field fence broke a 1-1 tie in the fifth inning. Lavoie’s (pictured, above) fourth homer of the summer ignited the subsequent offensive fireworks.

Briley Knight (Portland) launched his second homer, a two-run shot to right field in the sixth, extending the lead to 4-1. Lavoie then crashed a booming double off the center-field fence and scored on Logan Johnstone’s (Gonzaga) ensuing single.

Corvallis erased all doubt with four runs in the seventh. Mason Le (CSU Northridge) doubled off the left-field fence to score Jonah Advincula (Redlands). Le moved to third on a groundout and scored on a sacrifice fly by Kiko Romero (Arizona in 2023).

Following a walk to Knight, Zander Darby (UCSB) slammed his fifth homer well over the right-field fence for a 9-1 advantage. It was his fifth of the season, tying him with Romero and Ely Kennel (Oregon State in 2023) for the team lead.

Lavoie homered, doubled, scored twice and drove in one. Advincula had three hits, two runs and a stolen base; Knight and Darby each had two-run homers.

Corvallis has six homers in the first five games of the ongoing eight-game homestand. It also established a 4-1 edge vs. the Pickles in 2022, clinching the season series.

Winning pitcher Kaden Segel (Linn-Benton) allowed one tough-luck run and five hits in five innings, with seven strikeouts and no walks. It matched his longest outing of the summer, as did his seven strikeouts.

The lone run off Segel came with two outs in the first when a routine groundball hit directly at the shifted shortstop deflected off the second-base bag into left field. Instead of the third out, the fluke single enabled a runner to score from second.

Neil Feist (El Camino College) added two scoreless innings, Kaleb Kantola (Lipscomb) and Nathan DeSchryver (Gonzaga) one each to close it out. Portland did not have a hit in the final five innings.

The series concludes at 1:05 p.m. Sunday. UCSB’s Matt Ager (0-1, 2.89) will start for the Knights in his final appearance of the summer. Portland has not yet announced its probable starter.