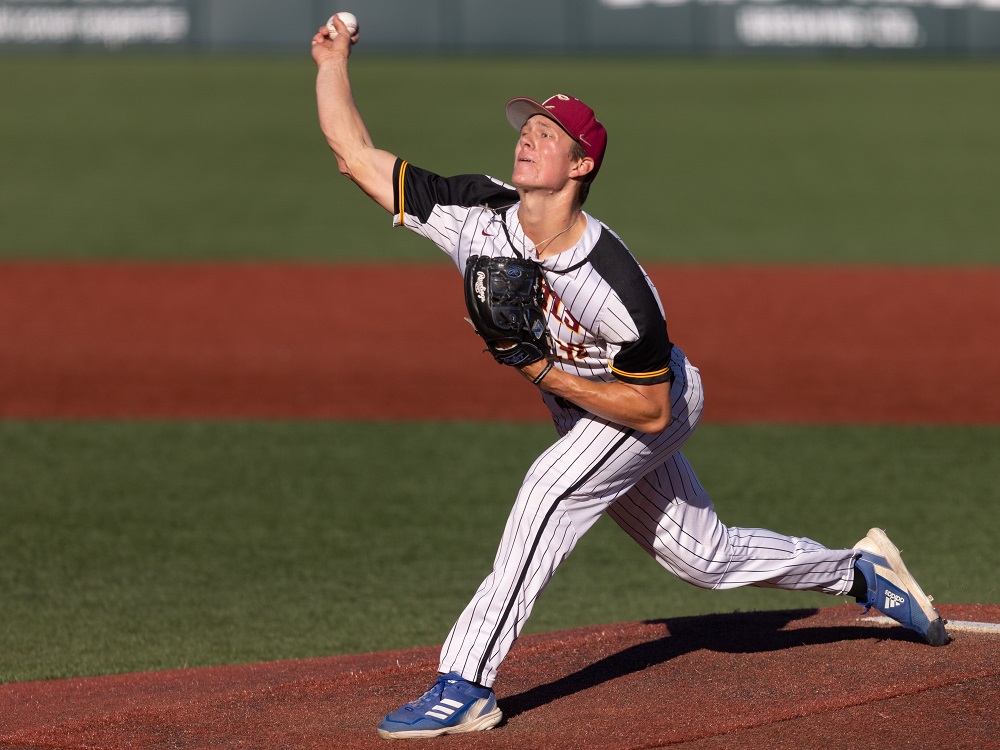 Sunday, July 24, Corvallis, Ore. – The Knights completed a key sweep of Portland with a 4-3 victory before a Goss Stadium crowd of 1,638.

A two-out single in the bottom of the eighth by Temo Becerra (Stanford) knocked in the go-ahead run. Reliever Ethan Ross (San Jose State) then struck out the side in the ninth, stranding the tying run at second base, to give the Knights their eighth win in a row.

Kiko Romero (Arizona in 2023) was hit by a pitch leading off the decisive eighth inning. He was sacrificed to second, stole third, and then strolled home on Becerra’s clutch single.

Starter Matt Ager (UCSB) was outstanding in his season finale. He allowed just three hits and one run in six innings, struck out five and retired the final 13 Pickles in a row.

Ager (pictured, above) left with a 3-1 lead but the bullpen could not hold it and he was not involved in the decision. He finished 0-1 with a 2.19 ERA in 24.2 innings, with 21 strikeouts; he did not allow a run in six of his eight appearances.

Briley Knight (Portland), Tanner Smith (Oregon State) and Logan Johnstone (Gonzaga) drove in runs in the sixth, when the Knights erased a 1-0 deficit. Portland answered with two runs in the seventh to draw even.

The Knight play a nonleague game against the Northwest Star Nighthawks at 6:35 pm Monday. They resume WCL action on Tuesday with a 6:35 pm home game against Springfield.

The series shifts to the Hamlin Sports Complex in Springfield on Wednesday night and concludes back at Goss Stadium on Thursday. The first-year Drifters took 2 of 3 against the Knights back on June 28-30.