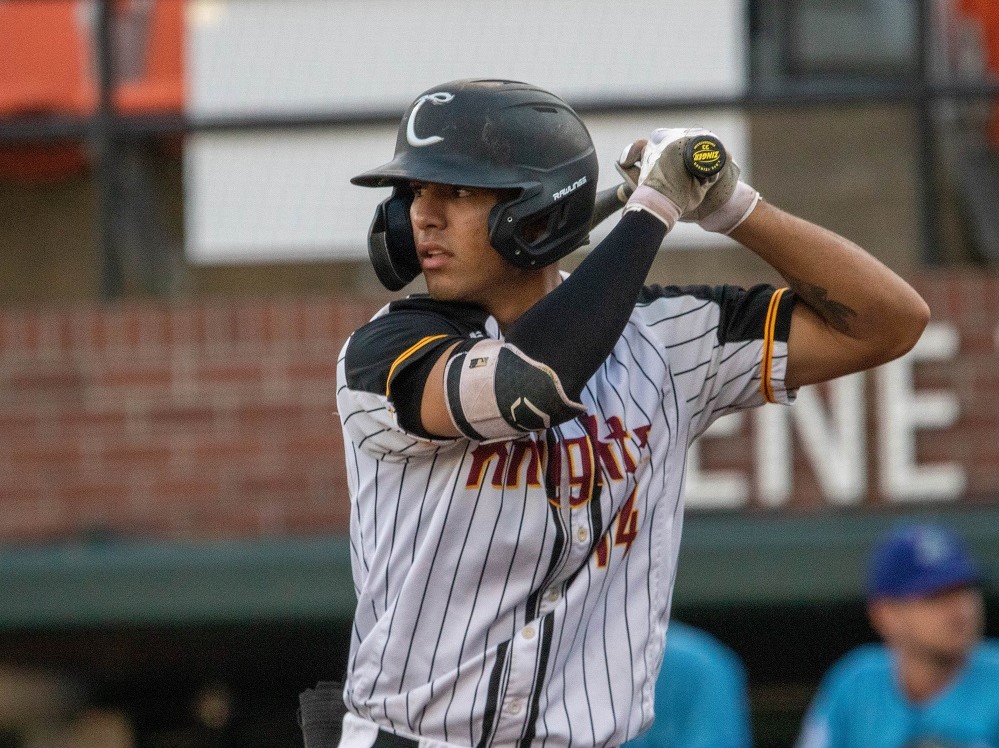 Tuesday, June 28, Springfield, Ore.  – First baseman Kiko Romero (pictured, above) homered and doubled but it was not enough as the  Knights fell 3-1 at Springfield in a West Coast League game at the Hamlin Sports Complex.

The Knights (12-5 all, 12-4 WCL) thus suffered back-to-back losses for the first time this summer. It was their first-ever game against the Drifters, who joined the WCL prior to the 2022 season.

Romero’s team-high third homer of the season – his second in his past three games – scored the Knights only run in the eighth inning. It ended a strong of 16 consecutive scoreless innings for Corvallis, which was shut out 3-0 by Bellingham on June 26.

Romero, who will play at Arizona next season, also singled and finished with three hits. Center fielder Jonah Advincula (Redlands) had two hits.

The series resumes at Goss Stadium at 6:35 p.m. Wednesday. The projected starting pitchers are right-handers Jesse Barron (2-0, 0.00) of the University of San Francisco for the Knights and Whitworth’s Hunter Dryden (0-1, 2.45) for Springfield.

Corvallis then hosts the Port Angeles Lefties on July 1-3. The first two games begin at 6:35 p.m.; the finale is the annual Oregon State Credit Union Fireworks Night contest, which begins at 7:15 p.m.

Former NFL player Golden Tate will not accompany the Lefties to Corvallis. He has network broadcasting responsibilities and won’t rejoin the team until July 8.

In other news, the Knights have signed Portland outfielder Briley Knight, incoming USC catcher Luca DiPaolo and Utah pitcher Cam Day for the remainder of the season.

Knight graduated from Crescent Valley High School in Corvallis and will be a four-year Knight. He hit .252, with eight homers and 27 RBIs for the Pilots this spring before missing the final quarter of the year with a leg injury. He hit .247 with six homers and 29 RBIs in 2021, his first season at UP following his transfer from Utah.

Knight was the 2019 West Coast League Player of the Year after hitting .357, with 18 doubles, three triples and eight homers, with 42 RBIs and 18 stolen bases, helping the Knights to the title.

Day was the Deseret News state 6A Player of the Year and the PBR Utah Player of the Year in 2021, when he was 11-1 with an 0.40 ERA and 133 strikeouts and nine walks in 76.1 innings. He was also an all-region selection and a Perfect Game high honorable mention All-American.