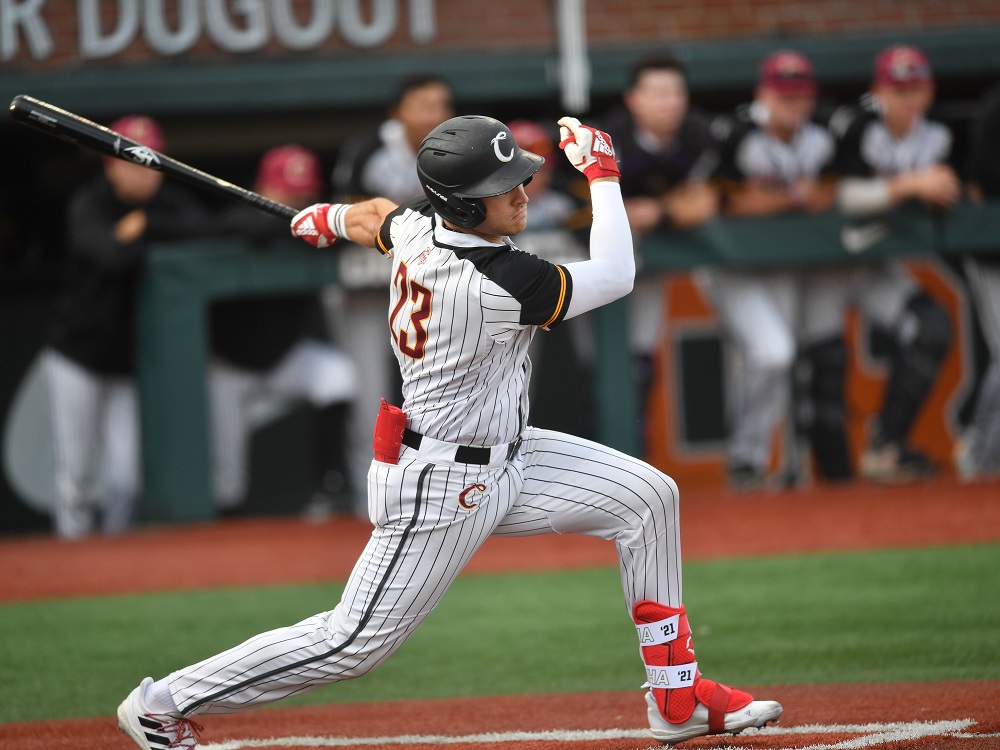 Wednesday, June 29, Corvallis, Ore.  – The Knights busted out of a two-game offensive slump in impressive fashion in a 14-2 victory over Springfield at before a Goss Stadium crowd of 1,303.

Right fielder Brady Lavoie (pictured, above), first baseman Kiko Romero and third baseman Ely Kennel blasted homers for the Knights (13-5 all, 13-4 WCL). They had scored just one run in 18 innings in their last two games before Wednesday’s explosion.

Romero (Arizona in 2023) gave the Knights a 1-0 lead in the first inning by jacking his third homer in the last four games over the left-field fence. He also homered in a 3-1 loss in the series opener at Springfield on Tuesday night.

The first North Carolina State player for the Corvallis Knights, Lavoie crushed his first homer, a two-run shot, to ignite a 10-run sixth-inning outburst that sent the Knights ahead 14-0, putting the game out of reach.  Kennel’s 3-run homer capped the rally, the Knights biggest of the season.

Every Knights starter had one hit and at least one run. Darby scored three times, Titus Dumitru (LBCC), Kennel and catcher Tyler Quinn (Pacific U) twice each.

Starter Jesse Barron (San Francisco) kept his perfect record intact by spacing out three singles over five innings. He escaped a two-on, one-out jam in the first inning, then retired 12 of the next 14 Drifters to go the required five innings to earn the victory.

Corvallis then hosts the Port Angeles Lefties on July 1-3. The first two games begin at 6:35 p.m.; the finale is the annual Oregon State Credit Union Fireworks Night contest, which begins at 7:15 p.m.

Former NFL player Golden Tate will not accompany the Lefties to Corvallis. He has broadcasting responsibilities and won’t rejoin the team until July 8.

A native of San Luis Obispo who played for the Knights before his freshman season with the Mustangs, Lee hit .357 in 2022, with 15 homers and 55 RBIs. He was named the Big West Conference Field Player of the Year and won the Brooks Wallace Award, given annually to the top collegiate shortstop.

A left-handed pitcher from Richardson, Texas, Palisch played for Corvallis following his freshman season at Stanford. He was 0-0, 5.40 in seven games, with a save and 10 strikeouts in 10 innings.

Palisch was 6-3, 2.39 for the Aggies in 2022, with five saves and 73 strikeouts in 60.1 innings. He helped them reach the College World Series in his first season there as a graduate transfer.