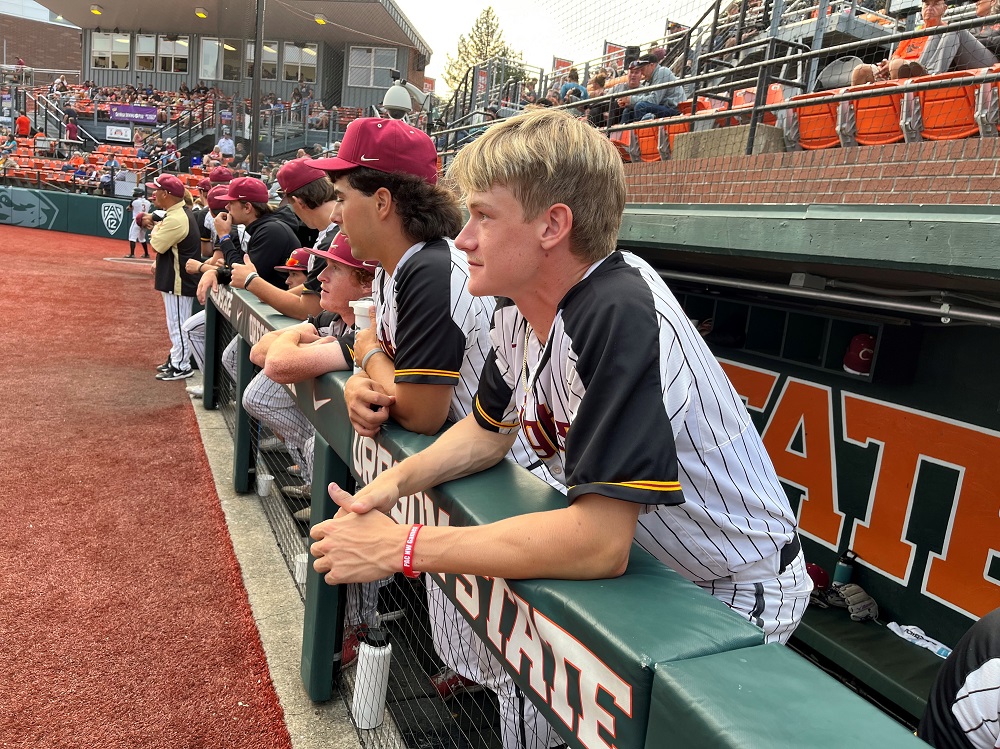 Monday, August 1, Corvallis, Ore. – Two new pitching signees shone in the Knights debuts, leading them to a 5-4 victory over the Northwest Star Nighthawks in a nonleague game at Goss Stadium.

College freshmen-to-be Nathan Marshall (pictured, above) and Garrett Holpuch play for the Gerding Construction American Legion team, whose season is over. They were added to rest a stressed Knights pitching staff, and to show their stuff to the coaching staff.

A West Albany grad who will play at Lane Community College in 2023, Marshall was a strike-throwing machine while efficiently breezing through four scoreless innings, with 41 strikes in 64 pitches.

His first five outs came on strikeouts. He spaced four singles, walked one, and picked a runner off base. Marshall has also been added to the league roster for the final week.

Holpuch played at Corvallis High and was the South team’s Most Outstanding Pitcher in the recent Oregon All-Star Series. He will play at Centralia (Wash.) JC in 2022-23. He went 2.2 scoreless innings before tiring and allowing four runs with two outs in the seventh. He allowed two hits, struck out two and walked two.

Corvallis won in walkoff fashion on catcher Luca DiPaulo’s (USC in 2023) opposite-field, bases-loaded single in the last of the ninth. It scored Titis Dumitru (Linn-Benton CC), who singled with one out and advanced to third on two walks.

Corvallis has added right-handed pitcher Victor Quinn, a sophomore-to-be at Oregon State. He is a 6-foot-1, 217-pounder from Liberty High School in O’Fallon, Mo., who was 0-0 in four games with the Beavers, with one strikeout in 2.1 innings.

He previously played for the independent Medford Rogues, where he was 2-0 with a 2.57 ERA and 40 strikeouts in 19 innings over 11 appearances.