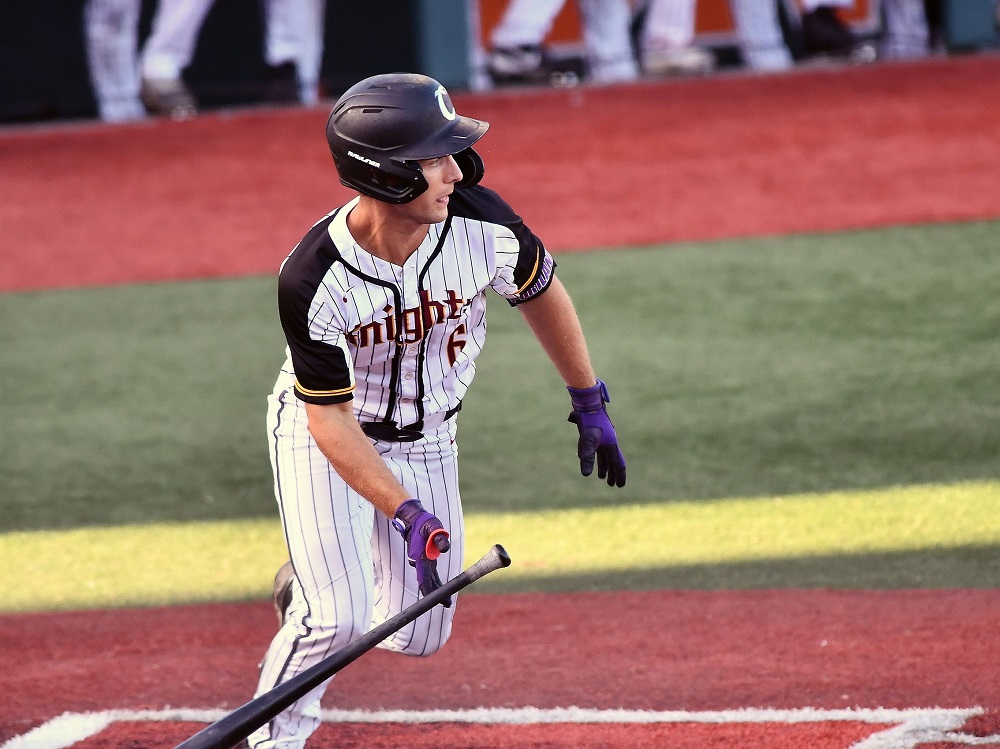 Shortstop Spencer Scott’s (Portland, pictured above) two-run, two-strike, two-out single in the eighth inning drove in the go-ahead runs, breaking a 3-3 deadlock. And reliever Matt Scott (Stanford) finished off a perfect performance by retiring the side in order in the ninth, preserving a 5-3 victory over Yakima Valley at Goss Stadium that forced a winner-take-all Game 3 in the first-round series.

The Knights (42-17 all, 1-1 playoffs) and Pippins will meet at 6:35 p.m. Thursday for the right to advance to the Aug. 13 South Division championship game against Ridgefield, which defeated Portland 7-5 on Wednesday to sweep their first-round series, 2-0. San Jose State lefty Ethan Ross (2-1, 2.94) is the projected starter for Corvallis; Yakima Valley’s probable is undetermined.

A monumental defense gaffe set up the game-winning rally. Corvallis catcher Ryan Stafford (Cal Poly) led off the eighth with a walk but Kiko Romero (Arizona) followed with a hard ground ball to shortstop that looked to be a certain 6-4-3 double play.

However, the ball skipped through the defender’s legs and Stafford advanced all the way to third. A walk to Briley Knight (Portland) loaded the bases and, after a strikeout, Stafford tied the game 3-3 on a fielder’s choice ground out by Mason Le (CSU Northridge).

Spencer Scott then lined a 1-2 pitch up the middle to knock in the go-ahead runs. That gave the Knights their first lead in the series; they trailed the whole way on Tuesday in a 7-6 loss at Yakima in Game 1.

Matt Scott entered with two outs in the sixth and retired all 10 Pippins he faced in order. He struck out four, including three of the four final batters that he faced. Corvallis starter Kaden Segel (Linn-Benton) went 5.2 innings and allowed three runs on five hits, with four strikeouts.

The winner of this series will play Ridgefield in a single-game championship on Saturday. The South survivor will face the North Division titlist, either Bellingham or Wenatchee, on Aug. 15 for the league title.