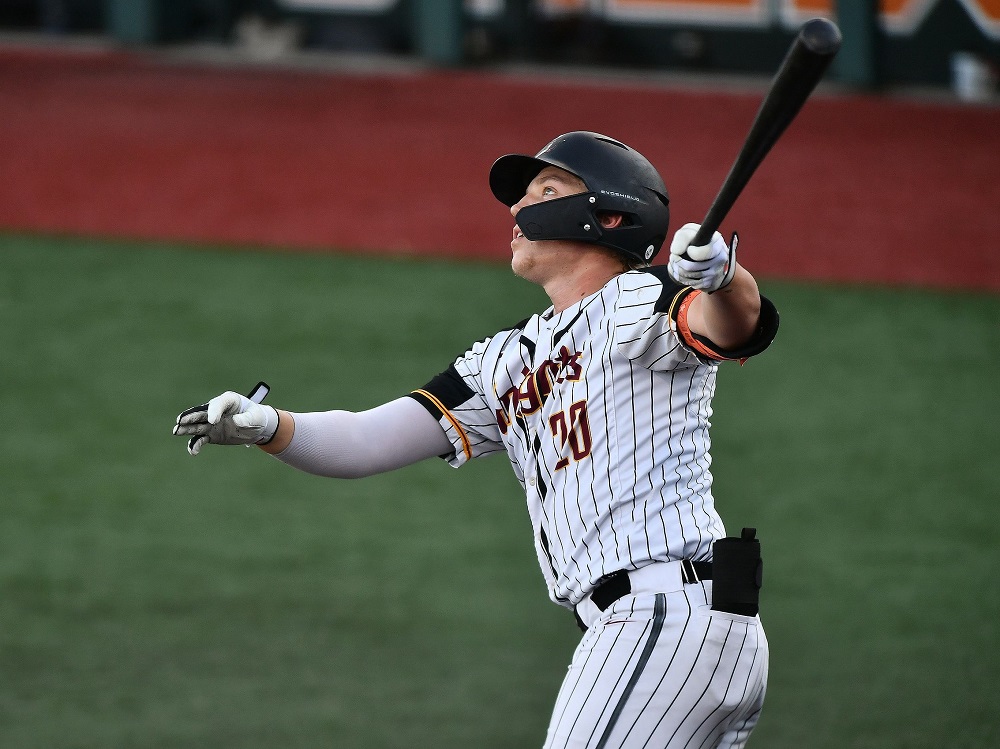 The Knights blanked Yakima Valley 5-0 in the decisive Game 3 of the South Division Playoff Series, completing a comeback from a 1-0 series deficit and thrilling a Goss Stadium crowd of 1,080.

The Knights (43-17 all, 2-1 playoffs) will host the Ridgefield Raptors in the South Division championship at 6:35 pm Saturday at Goss Stadium. The third-seeded Raptors swept Portland 2-0 in their opening-round series. Ridgefield was 4-2 vs. Corvallis in the regular season, winning both ends of the home-and-home series 2-1.

Smith’s two-out RBI single broke a scoreless tie in the fourth inning. In the sixth, his massive two-run homer to left field, again with two outs, upped the lead to a more-comfortable 3-0. It was his third homer of the summer (sixth overall).

The Knights capped off the night in the eighth, when Briley Knight (Portland) scored from third and Kiko Romero (Arizona) came all the way home from second on Tyler Quinn’s (Pacific U) suicide squeeze bunt.

Those runs were more than enough for Ross, Gartrell and Feist, who combined to allow just two hits while striking out seven. They threw 87 strikes in 126 pitches; the Pippins did not have a hit or a runner after the fourth inning.

Ross pitched a scoreless and efficient four innings, allowing just two hits. He struck out four, walked three, and stranded five Yakima Valley base runners. However, he did not go the required five innings to earn credit for the victory.

Gartrell followed with a perfect fifth and sixth innings, striking out three with a 19-8 strike/ball ratio. Feist finished up, getting five of nine outs via the ground ball and filling the zone with 25 strikes in 35 pitches in a three-inning save.

The South champion will face either Wenatchee or Bellingham of the North Division titlist on Aug. 15 for the WCL title. Bellingham eliminated Victoria and Wenatchee ousted Kamloops on the Northern side of the bracket. They will play in Bellingham on Saturday.

It marked the third time the Knights have rallied to win the final two games of a playoff series against the Pippins after losing the opener. It also happened in the 2021 Championship Series and the 2017 South Division series.