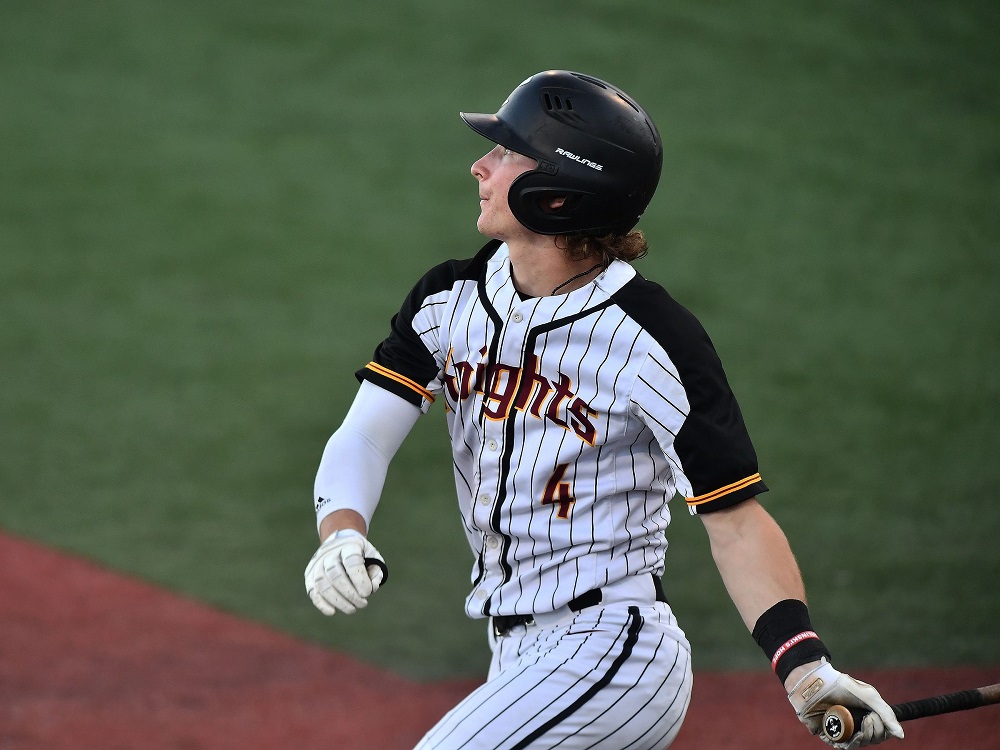 The Knights (41-17 all, 0-1 playoffs) now must win Game 2 on Wednesday and Game 3 on Thursday to capture the series and remain in contention for their sixth consecutive WCL championship. Both games will be played at Goss Stadium, starting at 6:35 p.m.

The Pippins roughed up Corvallis starter Cam Day (Utah) for four runs and eight hits in three innings to take a quick 4-0 advantage.

The Knights scored three times in the fifth to pull within 4-3. Two runs scored on a throwing error and a fielder’s choice by Briley Knight (Portland) drove in the third run.

However, Yakima Valley scored three times off ace reliever Sean Wiese (Hawaii) in the fifth and sixth innings to restore its four-run lead at 7-3.

The Knights rallied again with two runs in the seventh on an RBI double by Tyler Quinn (Pacific U) and a run-scoring single from Ryan Stafford (Cal Poly, pictured above). Quinn doubled in another run in the eighth but the potential tying run was thrown out at home on the play, keeping it at 7-6.

Stafford (Cal Poly) had three hits and an RBI, Quinn three hits with two doubles and two RBIs and Spencer Scott (Portland) doubled for Corvallis, which was 6-0 vs. the Pippins in the regular season before Tuesday’s setback.

If Yakima Valley wins on Wednesday, it advances to the South Division championship game against Ridgefield or Portland. If Corvallis prevails, a decisive Game 3 will be played at 6:35 p.m. Thursday, also at Goss Stadium. San Jose State lefty Ethan Ross (2-1, 2.94) would get the ball for the Knights.