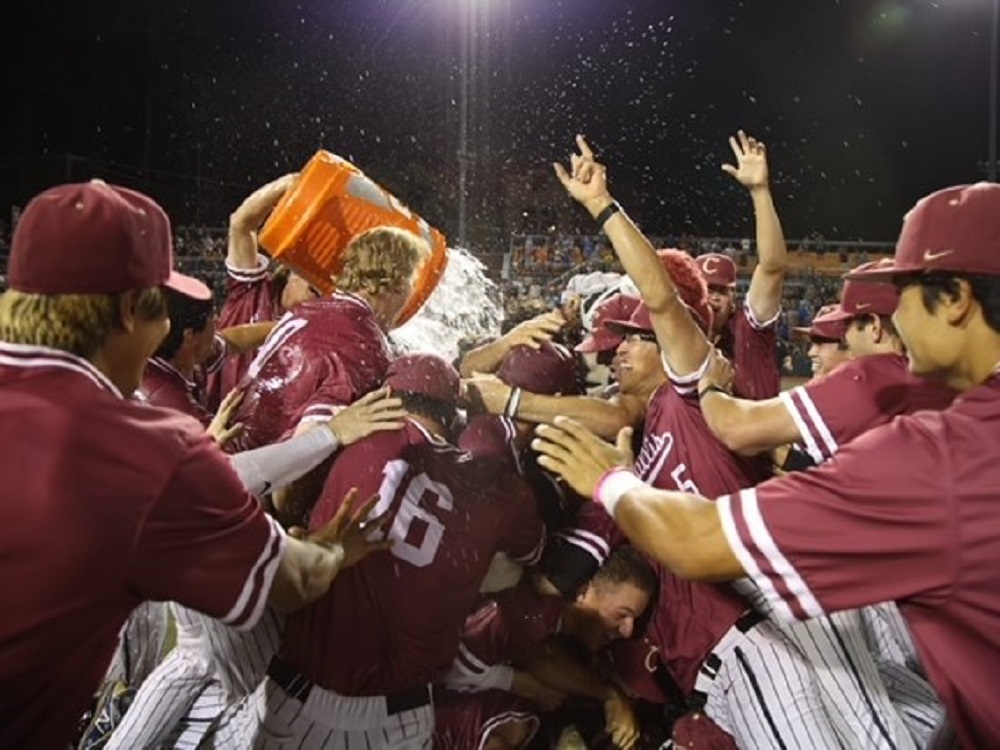 The Knights captured their sixth consecutive West Coast League championship on Aug. 15, defeating Bellingham 5-0 before an enthusiastic, playoff-record crowd of 2,075 at Goss Stadium.

It was also the Knights fourth consecutive elimination-game triumph. After losing their playoff opener at Yakima Valley, Corvallis outscored its opponents 20-5 in its march to the title.

In his postgame remarks to the crowd, head coach Brooke Knight praised the Knights for their summer-long dedication to excellence. He said they arrived to Goss Stadium well before the required 3 p.m. reporting time and were on the field and ready go well before the 3:30 deadline.

“Most of the time that was always the plan,” Knight said. “These guys are here at 1:30, 2 just kicking it and enjoying each other.”

“But these guys just really enjoyed spending time with each other, and that part of it was neat to see,” he said. “They really care about each other and they got along really well.”

Scott was the winning pitcher in the 5-3 comeback victory over Yakima Valley in Game 2 of the South Division series that ignited the Knights closing playoff run. His 3.1 perfect innings enabled the Knights to erase a 3-2 deficit with three eighth-inning runs.

Kaden Segel (Linn-Benton CC) relieved Matt Scott with two on and two out in the fourth and ended the threat with a strikeout. He then added three more scoreless innings, allowing only two hits.

He finished with six strikeouts and no walks to earn the championship game win. It was also his second playoff appearance; he started the Yakima Valley game Matt Scott finished.

Ethan Ross (San Jose State) booked a scoreless eighth, with a strikeout and a nifty 4-6-3 DP to retire the side. Cam Day (Utah) touched 99 MPH on one pitch, struck out the side in the ninth and then was buried in a mass of dogpiling teammates.

It was the fourth title for Briley Knight, a member of the 2018, 2019 and 2021 championship teams. It was the second for Ross, Segel, Ethan Loveless, Spencer Scott, Kiko Romero, Tanner Smith, Kaleb Kantola, Nathan DeSchryver and Sean Wiese, key members of the 2021 title team.

It was the third time the Knights and Bells played for the championship. Corvallis won in 2016 and the Bells prevailed in 2014; both series went the full three games under the old two-round playoff format.

It was also a franchise record for a playoff game. The former standard of 1,903 was set against Bellingham on Aug. 15, 2016, exactly seven years ago.