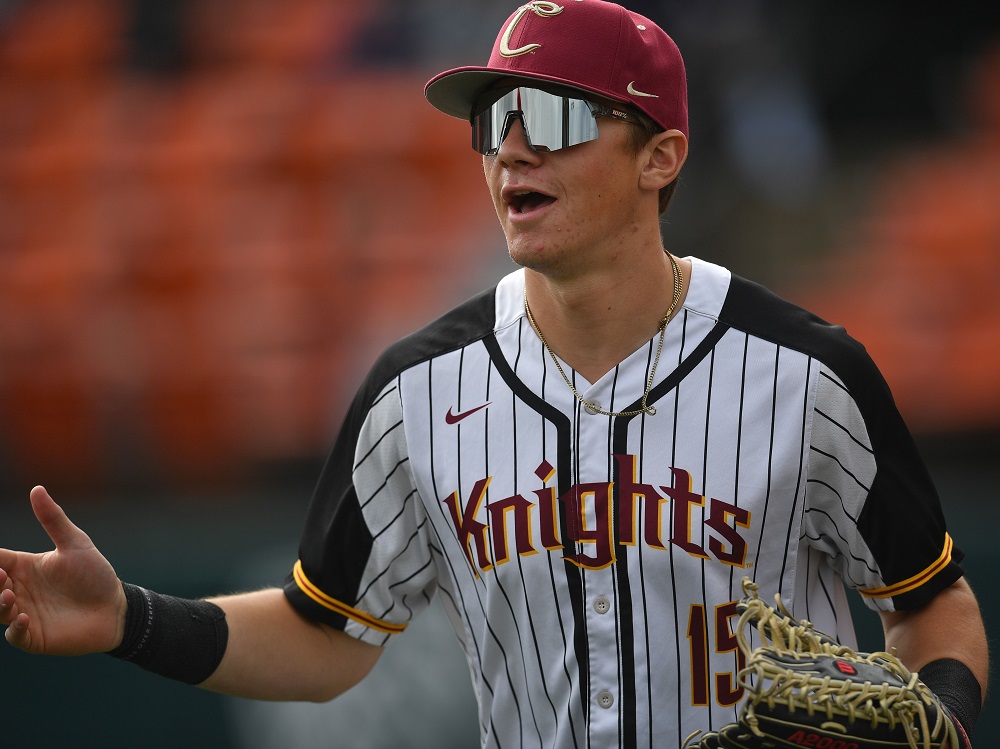 Friday, June 24, Corvallis, Ore.  – Bellingham edged Corvallis 8-7 in 11 innings to claim the opening round of a weekend series between the division leaders in the West Coast League before a disappointed Goss Stadium crowd of 1,519.

The Knights tied the game in dramatic fashion with in the last of the ninth. Trailing 7-5 with two outs and no one on base, consecutive singles by Kiko Romero (Arizona in 2023), Ely Kennel (Oregon State in 2023), Mason Le (CSU Northridge) and Zander Darby (UCSB) knotted the game 7-7 to force extra innings.

Corvallis had a runner on third with two outs in the home 10th but could not score. The Bells then scored in the 11th inning on two singles and a throwing error to post their 10th consecutive victory.

Bellingham (14-4) maintained its 3.5-game lead over Kamloops in the North Division. The Knights dropped to 11-3 overall and 11-2 in league play and saw their  lead over Bend in the South Division trimmed to 1.5 games.

Left fielder Titus Dumitru (pictured, above) of Linn-Benton was 4-for-5 with a triple, a double, two singles, two runs, two RBIs and a stolen base to lead the Knights. A second baseman, Le had three hits, two runs, an RBI and a stolen base. Center fielder Logan Johnstone (Gonzaga) singled twice, with a steal and an RBI.

A native of San Luis Obispo who played for the Knights before his freshman season with the Mustangs, Lee hit .357 in 2022, with 15 homers and 55 RBIs. He was named the Big West Conference Field Player of the Year and won the Brooks Wallace Award, given annually to the top collegiate shortstop.

A left-handed pitcher from Richardson, Texas, Palisch played for Corvallis following his freshman season at Stanford. He was 0-0, 5.40 in seven games, with a save and 10 strikeouts in 10 innings.

Palisch was 6-3, 2.39 for the Aggies in 2022, with five saves and 73 strikeouts in 60.1 innings. He helped them reach the College World Series in his first season there as a graduate transfer.