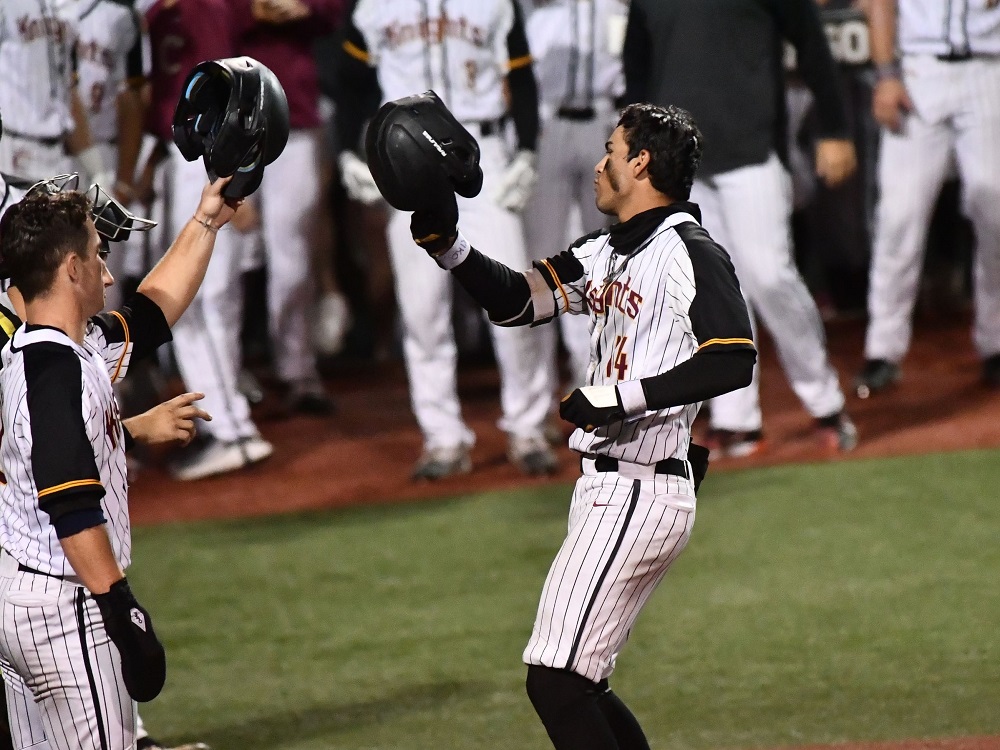 Saturday, June 25, Corvallis, Ore.  – First baseman Kiko Romero (pictured, above) unloaded a three-run homer off the scoreboard, leading the Knights to an 8-4 win over Bellingham before a crowd of 1,662 at Goss Stadium.

The victory evened the series between the West Coast League’s division leaders at one game apiece. The North-leading Bells (14-5 WCL) edged South pacesetter Corvallis (12-3 all, 12-2 WCL) 8-7 in 11 innings on Friday night in the opener.

A transfer from Central Arizona College who will play at Arizona in 2023, Romero’s bomb sent the Knights ahead 5-0 in the third inning. It was one of three homers hit by the Knights, who had only two in 13 WCL games before Saturday.

Second baseman Ely Kennel (Oregon State in 2023) hit a 415-foot, two-run blast in the first inning to put the Knights up 2-0. Right fielder Ethan Loveless (Portland) added his first homer, a solo shot in the fourth.

Righthander Jaden Harris (Utah) has his longest stint of the season and allowed just four hits and two unearned runs in five innings. He fanned six, had one walk,  threw 42 strikes in 68 pitches and lowered his ERA from 4.76 to 2.53.

Closer Sean Wiese (Hawaii) went the final two innings for his second save. The grad transfer from George Fox has a perfect 0.00 ERA and 15 strikeouts without a walk in 13.2 innings over six appearances. He has allowed only four hits.

Corvallis pitchers had only two walks on Saturday after combining for 25 free passes in their previous three games.