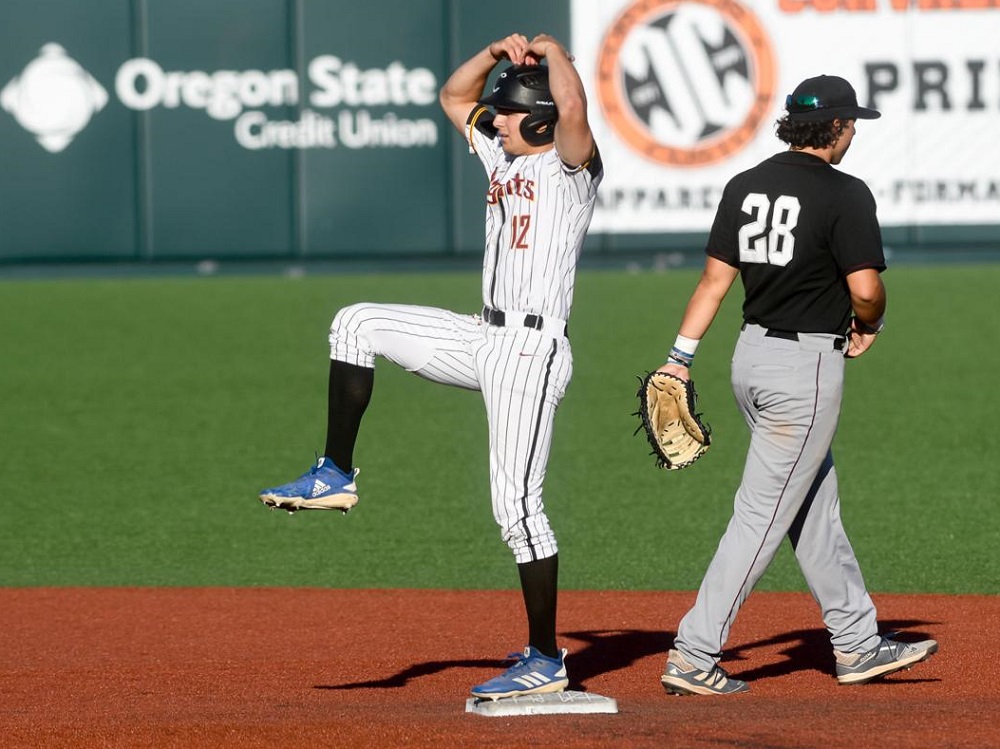 Hard Work Pays Off in the Win Column
by Jesse Sowa of the Gazette-Times
Monday, August 9, 2021

Kyler Stancato didn’t know much about the Corvallis Knights before arriving in the mid-valley in mid-June for summer baseball.

What he was familiar with was the winning that the local collegiate wood bat team does. Four straight West Coast League titles caught his eye.

An outfielder and a sophomore at Washington State this fall, Stancato discovered once he put on the Knights uniform that there’s work to be done, instruction to be received and improvement to be made in order to take advantage of the opportunity.

“Everybody comes here early and gets their early work in, which is awesome,” he said. “The coaches really teach us a lot. Everybody believes in what we do.”

Stancato isn’t alone in the realization that the Corvallis program takes a holistic approach in helping its players get better. Newcomers find that there isn’t the laid-back approach as in some other summer ball locales.

“We work real hard on the mental stuff. That’s a big thing our coaches preach,” said Corvallis outfielder Nick Vogt, an incoming UC Santa Barbara sophomore. “We try to make the competition against ourselves, getting better each day, instead of against ‘Joe’ on the mound. I like that a lot. I think that’s really progressive.”

The Knights (45-11 overall and 36-9 in WCL play) are on their way to winning both halves of the South Division regular season for the third time since 2017.

Stancato says the team environment breeds a confidence that has produced success on the field.

“Even if we’re down by four runs, everybody knows we’re still in the game and going to win the game possibly,” he said. “No one gives up and is locked in every pitch, which is really awesome.”

Teammate Ty Uber appreciates the competitive atmosphere within the program because he believes it will be a plus for him going forward. He says it’s a good kickstart as he heads to Stanford as a true freshman

“It’s huge, especially in a game that’s as mental as baseball is,” Uber said. “If you’re not competitive, you’re just kind of meat for people who are more competitive. You’ve got to bring it every day out here, and not just in the games but in practice. Guys here want to get better and that’s how the system’s run.”

Vogt describes it as “a one-of-a-kind environment” and says he can’t imaging many other teams working as hard as the Knights do.

Coming out on top at the end of a game makes the time spent preparing all worth it, and the players have bought into that.

“When you put in the hard work and you’re winning it’s really fun,” said Vogt, whose college coach is former Oregon State pitcher Andrew Checketts. “I think the coaches do a good job of keeping that environment disciplined and fun at the same time.”

Vogt, a first-year player in the program, knew a few others who had played for Knights head coach Brooke Knight and assistant Youngjin Yoon and only heard positive feedback about their experiences. Yoon, a veteran assistant in the program, leads the Corvallis focus on strength and conditioning and mental awareness.

On an individual level, Vogt has used this summer to try to distance himself from his habit as a “stat addict,” always checking his numbers.

“When you’re doing good, it’s cool, it’s fun. When you’re not doing so hot, the stuff will bite you in the butt,” Vogt said. “I’m just trying to stay even keel and have fun every day.”

Uber says that because he feels good about his mechanics he’s focusing on the mental side of the game. For Stancato, he’s working on driving fastballs to all fields and out of the park and trying to gather momentum as heads into fall practice in Pullman.

Vogt said the atmosphere and hard-working approach provided by the Knights has helped him improve as a player but also learn a life lesson.

“The more you hammer it, the better person, the better man you become,” he said. “I’m really grateful to be here this summer.”